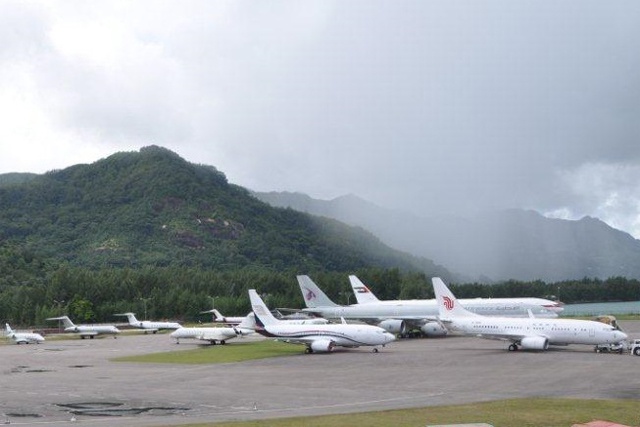 Photo of Private jets seen lined up at the designated parking area at the Seychelles international airport at the end of March this year. (Seychelles Civil Aviation Authority)

(Seychelles News Agency) - Seychelles has been witnessing an increase in private aircraft flying to the Indian Ocean archipelago. Some 184 private planes have been recorded to have landed in Seychelles from January to April this year, with models ranging from the Global Express, Falcons, Gulf Streams and even Boeing 737s and 777s often seen lined up at the designated parking bay at the Seychelles International Airport.

The figure represents nearly half of the 412 private aircraft that landed at Pointe Larue airport, on the eastern coast of mainland Mahé in 2014, hinting that the same figure or more is likely to be achieved in 2015.

Seychelles, an archipelago of 115 islands in the Indian Ocean is well-known for its crystal-clear warm waters and picturesque tropical beaches. With tourism being the pillar of the Seychelles economy, the small island nation with a population of around 90,000 people, has over the years managed to build a reputation as a small but luxurious holiday destination.

An overall increase in tourism arrivals have been recorded in recent years where a total of 230,257 visitors came to its shores in 2014, which also include figures from the private jets, whose passengers usually stay at 5-star hotels or private island resorts in luxury villas.

According to statistics available on the National Bureau of Statistics website, NBS, out of the 98,630 visitors that have disembarked in Seychelles up to May 10, 2015 a total of 2,324 of them came on private planes.

“A niche market we are tapping into”

“It is a niche market we are tapping into,” said Laurence, adding that many visitors arriving by private jets, make specific demands prior to their arrival and are often whisked off by helicopter to smaller island resorts, soon after arrival at the international airport, notably Fregate and North Islands, revealed in 2014 as two of the most expensive hotels in the world.

“Many of the VIPs come to Seychelles and at their request are transferred to smaller island retreats to indulge in fishing or sheer relaxation,” said Laurence.

The inflow of private aircraft tends to peak from March to May and also in December during the festive season.

This year to date, SCCA’s statistics indicate that 47 private jets arrived in January, followed by 26 in February, hiking up the 65 in March while April recorded 46. This year’s figure also includes the arrival of a private Boeing 787 Dreamliner.

This was the third Dreamliner to land in Seychelles after the historic landing in Seychelles of a scheduled Ethiopian airlines Boeing 787 Dreamliner aircraft on February 28. A chartered Dreamliner of Kenya Airways also made the trip to Seychelles last month carrying the entourage of the Ghanaian king of the Ashanti people.

The Asantehene, Otumfuo Osei Tutu II, who was the guest of honour at the fifth annual Carnaval International de Victoria held between April 24 to 26 also came in onboard a private jet.

The aviation authority, which regulates air operations to and from Seychelles, says it had been gearing up to accommodate an increasing number of such clientele, with the construction of an aircraft parking area at the north end of the airport terminal in 2003.

Esparon informed SNA that there have been a few instances, where private aircraft have had to fly on to park on the Seychelles second most populated island of Praslin which is located some 36 km northeast of the main island of Mahé, and 15 minutes away by plane.

This is done after landing at the Seychelles International Airport on Mahé for passengers to complete the standard entry formalities.

While the apron where aircraft stop after landing at the Seychelles international airport can accommodate six planes, usually three wide-bodied ones such as the Boeing or Airbus and three smaller ones, the parking bay for private planes can accommodate many more aircraft.

“We do not have slots because each aircraft are of specific lengths and wingspans. So we fit them in as best as we can,” said Esparon adding that an aircraft can remain parked for as long as they wish and pay SCAA accordingly.

“However, it is rare that a plane stays more than two weeks; the average visitor stay in Seychelles being 10 days,” she told SNA.

Benefits for aviation and tourism sector

According to SCAA, private planes pay for landing fees, which is based on their maximum take-off weight, for which the minimum charge is about $40. There is also a 40 percent surcharge for night landing and take-off- between 7pm and 5.30 am. The parking charge depends on the aircraft’s length and wingspan with the first six hours of parking allocated free.

Benefits to Seychelles from private air traffic also include money spent on accommodation, in this case luxury five-star resorts, excursions, domestic transport and other local expenditure.

Statistics available from the Seychelles Central Bank (CBS) website shows that tourism earning varies each month. For this year, for example, the lowest amount recorded has been around $26 million in February and April while tourism earnings in March amounted to $46 million.

The figures are based on information gathered from the banks and money exchange across the country that provide CBS with details of transactions related to tourism. According to CBS, it also takes into account certain accounts information relayed by tourism service providers like hotels and restaurants but that this is carefully interpreted to avoid double counting.

Nevertheless, it is not known exactly how much of the tourism earning figures are coming from high-end tourists mostly arriving on private planes.

According to the SCAA, private planes landing in Seychelles are from various parts of the world, including the UK, Russia, Switzerland, South Africa, Israel, the US, the UAE, France, Malaysia among others.