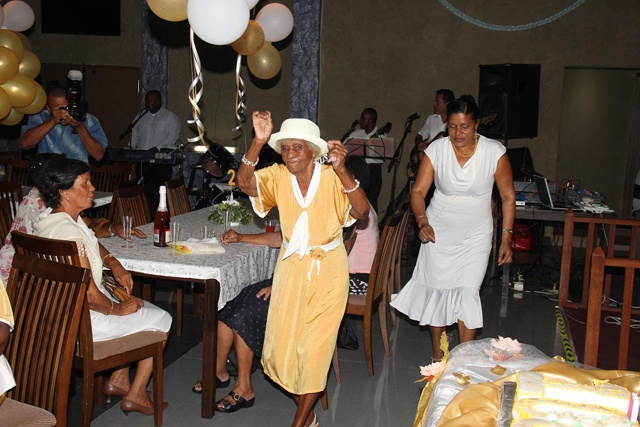 (Seychelles News Agency) - People living in the Seychelles islands in the Indian Ocean, a population of 93,000, have an average life expectancy of 73.1 years, with male life expectancy reaching 69.9 years and women living until 76.5 years, according to the National Bureau of Statistics (NBS).

The island nation’s current oldest centenarian is 106 year old Nancy Marie who resides at English River, a central district on the outskirt of the capital of Victoria. The centenarian who has lived the longest in Seychelles was Aline Amelie, a lady who passed away three months before her 110th birthday in 1996.

Interestingly, in Amelie's case, longevity seems to run in the family as she has two daughters who have lived to be centenarians, and one of them is still alive having celebrated her 105th birthday in July this year.

Since the year 1900 over 70 people in Seychelles, have lived to blow out a 100 candles and the majority 66 were women, and some even lived to an older age, according to the records of the islands’ Department of Social Affairs. To date, Seychelles has nine living centenarians which include one living in Florida.

The elders of the island nation in the western Indian Ocean were honoured and recognized for the contribution to society in an event organised for the International Day of the Elderly on October 1.

It included an exhibition showing the centenarians of Seychelles since the new millennium and a performance where the elders sang folks songs originating from the Seychelles’ French descendants, as well as a fancy dress ball.

Alda Philo, aged 100 years, is the newest on the centenarian list and describes herself as being a simple and humble person throughout her life.

“I never had much and worked hard for the little I had. I use to do domestic work, anything that could get me an income. I enjoy working and until now I still want to do things on my own, I still do certain things but not much anymore. I help my daughters and grandchildren who have to go to work and school,” explains Philo.

Alda Philo says she was never picky about food, especially during the times where many families could not afford basic necessities.

“I ate almost anything, fruits and vegetables like breadfruit and fish that were in abundance, and sometimes some meat. I ate what the Lord gave to me, and even though I didn’t have much, I would often share with others.”

Philo says she still exercises though not as vigorous as when she was young. She has to be cautious with her knees, now that they are no longer as strong as before.

She is not only the first of her family to reach the golden age but also the first child of her family consisting of nine brothers and sisters, who have passed away. Philo has two daughters.

When asked if she wishes to live longer, she said; “It is the Lord that keeps us alive and we need to love our God. If I am to live some more years it is all up to him. I do my very best to attend mass because we need to thank God but when I can’t the priest comes to my home.”

Philo, who is a Roman Catholic, believes that the elixir of her golden age is prayer, work, good nutrition and a simple life.

Will new generations of Seychellois live a long life?

Seychelles society is changing in tandem with the rest of the world, with new dietary and lifestyle habits. SNA spoke to some Seychellois people, who are for the most part sceptical about the idea that the islanders will continue to live to a 100 years.

Paulette Anaou, a lady in her 60s said; “If you look at the life that this generation is living, they will not reach 100 or more. Firstly, alcohol and drugs are social ills that are causing our youth to die younger than they would normally do. Youngsters use those substances without a care or control.”

“I don’t think many people will reach such age, mostly because of our diet. The older generation would eat more healthily, more vegetables and would walk to their destinations compared to nowadays everyone wants to travel by car. People tend to go for fast food, they would not consider vegetables, and they would say that’s old people’s food,” said Jena Labiche, a 59 year old lady.

Petrina, a young woman in her 20’s, commented “I really don’t think much people would reach such age. So many factors hinder all ages. Even though we would want to eat right for a better life, we do not have much healthy food on the market and the prices are high, cultivating at home is difficult. I think more people will die at a younger age.”

Surveys conducted, however, show a different picture. The study conducted by the Ministry of Health on non-communicable diseases 2013-2014 states that age specific causes of mortality has gone down with improved living conditions, public health programmes and improved health care during that interval.

However, with the increased life expectancy Seychelles has now an aging population and those aged 25-64 has doubled between 1989 and 2013. Seychelles has already passed the UN’s definition of an ageing society, as the UN’s aging index is calculated as the number of persons 60 years old or above per hundreds persons under age 15.

Lifestyle » Be a reporter: Write and send your article » Subscribe for news alert
Tags: NBS, centenarians, International Day of the Elderly, Minister Meriton, Ministry of Health