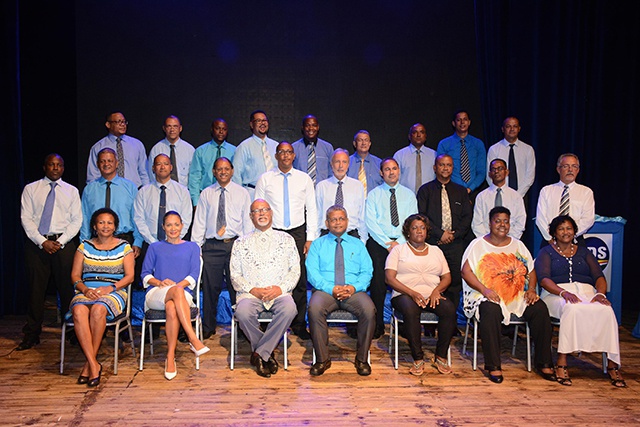 LDS candidates including that of Ile Perseverance presented to the party's supporters during a convention held on Sunday. (Patrick Joubert, Seychelles News Agency)

LDS announced its official line-up of four women and 21 men who will be contesting the polls in the 25 electoral districts of the 115-island archipelago in the western Indian Ocean.

The opposition coalition also presented its candidate for Ile Perseverance – a reclaimed island where the largest social housing project is being built. The island is set to become the 26th electoral district in Seychelles, but only upon the dissolution of the current National Assembly.

‘Fer li ou lasanble’ [Make it your assembly] was also unveiled as the campaign theme chosen by the party.

LDS was formed by members of four existing opposition parties -- the Seychelles National Party (SNP), Lalyans Seselwa (Seychellois Alliance), the Seychelles Party for Social Justice and Democracy (SPSD) and the Seychelles United Party (SUP) as a common bloc against the ruling Parti Lepep.

It was confirmed during Sunday’s convention that Patrick Pillay, the leader of Lalyans Seselwa, is the candidate of LDS for Anse Boileau, a district in the western region of the main island, Mahe. Wavel Ramkalawan, leader of the Seychelles National Party, was confirmed as the candidate for English River, a central district located on the outskirts of the capital, Victoria.

"We need to have our point of views taken into consideration in the next assembly,” said Ramkalawan, leader of the LDS council.

"The team which has been presented to you is serious and wants to see our country move forward," he added.

Ramkalawan also said that should his party wins the upcoming parliamentary elections members of the National Assembly will have to work three days a week.

Currently, the National Assembly meets on Tuesdays, except during the presentation of the budget or State of the Nation Address where debates are extended over several days.

In announcing its candidates, LDS also presented its manifesto for the elections highlighting eight key issues including national unity, democracy, the preservation of the Seychelles heritage, and the environment.

LDS is the second party to officially present its line-up after the ruling Parti Lepep earlier in July.

Other opposition parties have also expressed their intentions to take part in the elections and should be presenting their set of candidates in the coming days.

On announcing September 8-10 as the election dates on Friday, the Electoral Commission also announced August 17 as nomination day when candidates will have to officially submit their applications.

Seychellois voters will be casting ballots for the second time in less than a year following a presidential election at the end of 2015.