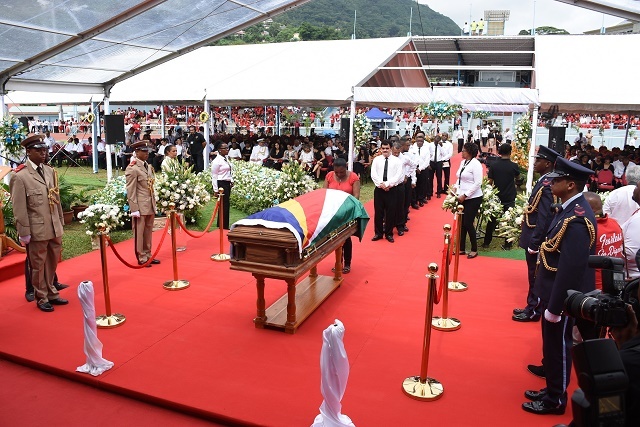 Hundreds of mourners descended at the Stade Popiler in the capital city, Victoria, to bid farewell to the former president. (Jude Morel)

(Seychelles News Agency) - Former President France Albert Rene, who led Seychelles for 27 years after taking power in a coup, was laid to rest near his mother on Thursday in the cemetery of Mont Fleuri where he spent most of his childhood.

Hundreds of mourners descended on the capital city, Victoria, to bid farewell to the former president, the longest-serving leader the island nation has ever had. Rene passed away on February 27 at the age of 83.

Thursday was declared a day of mourning and a public holiday as Seychellois leaders attended the state funeral.

Rene’s flag-draped casket arrived at State House in the early morning where he lay in state. Around 500 mourners paid their respects including, members of his family, high officials, members of the Cabinet of Ministers and the diplomatic corps.

His funeral cortege then travelled through the country’s capital to Stade Popiler (People’s Stadium) where members of the public could pay their respects.

Present were many supporters of United Seychelles -- the present name of the political party Rene founded in 1964 as the Seychelles People’s United Party (SPUP). The supporters were dressed in red, the colour associated with Rene’s party.

Speaking to SNA, 66-year-old Andre Isaac said he saw Rene for the first time when he returned to Seychelles from his studies in the UK in the early 1960s.

Isaac, whose family was staunch SPUP supporters, said he later worked for the party and became friends with the former president.

“I knew he was sick but I was still shocked when I heard of his passing. I will remember him as a frank, simple person who was always willing to help his people,” said Isaac.

A former Member of the National Assembly from Rene’s party, Ivy Edmond, said she would remember Rene’s leadership and his contributions towards Seychelles’ development.

“I am saddened by his passing because we have lost not only a great leader but a father. A person who loved Seychelles and did everything in his power to make this country prosperous. We should never forget where we come from and how Rene steered us to where we are today,” she said.

A 56-year old former soldier, Robin Gabriel, was posted at State House and worked alongside Rene for a number of years.

“Today I have brought my two children with me to honour a great man. If it was not for his social programme for Seychelles, I don’t think I would be where I am today. I am grateful to him for doing so much for Seychelles,” said an emotional Gabriel.

Kevin Selina, 36, described Rene as an exemplary leader, a freedom fighter, who put country before self.

“Today we see so many developments because of his devotion. He fought for equal opportunity for all and today we have free education and free health care because that was his vision for Seychelles,” said Selina.

Another young mourner at Thursday’s funeral service was 26-year-old Norita Legaie, from eastern Mahe district of Anse Aux Pins where Rene and his party started their political campaign in the 1960s.

“The fight to freedom started at Capucin, at my great-grandmother’s Evangeline Legaie’s house. Rene approached her to help him launch the party and to get others on board so I am here to honour him”, said Legaie.

“I will be forever grateful to him for our freedom, peace and unity that we enjoy and our identity. He will always remain in my heart as our great leader”, added Legaie.

The funeral ceremony at Stade Popiler was coordinated by John Etienne who said that it captured Rene's and his family’s wishes. The funeral service was presided over by the Seychelles Inter-faith council.

“We honoured president Rene and his simplicity through a dignified, moving and emotional service,” said Etienne.

Rene came to power in 1977 following a coup d’état that ousted James Mancham. He ruled Seychelles, an archipelago in the western Indian Ocean, until he retired in 2004.

Speaking on behalf of the government at the funeral service, Macsuzy Mondon, the designated minister said, “In the history of a country, a people, it happens that there is a man, or a woman somebody that stands out, somebody remarkable by his personality, his determination, his work, his accomplishments. For Seychelles, this man was France Albert Rene.”

Mondon said, “We pay homage to a head of state respected worldwide. We also pay homage to the man that despite his position and his authority always stayed a simple man. Apart from his intelligence and his ability to work hard, his determination and his courage we will remember him for his simplicity and for his good heart.”

The designated Minister said that Rene will be remembered for his socio-economic changes which transformed the Seychellois society and modernise the island nation.

“He once said it would be of great pride if as a people there would not be the for a description and that when the world heard the name Seychelles that would say it all. That was his message -- that Seychelles and Seychellois can shine,” said Mondon.

Rene is remembered as the leader who brought about socio-economic development to the island nation, through his vision for equal rights and opportunities for all. His legacy is complicated by the unexplained disappearances of Seychellois citizens during his rule.

Rene is survived by his wife Sarah and his children.