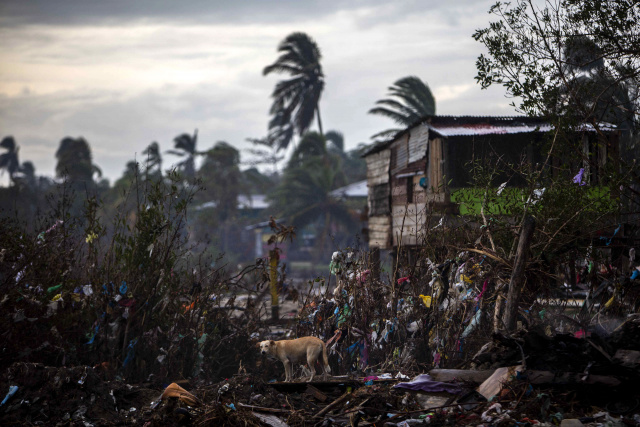 A dog eats from the rubble of houses destroyed by the passage of Hurricane Eta, in Bilwi, Puerto Cabezas, Nicaragua, on November 15, 2020, before the arrival of Hurricane Iota. Hurricane Iota is forecast to strengthen to an "extremely dangerous" Category Four by the time it makes landfall in Central America on Monday, the US National Hurricane Center warned, two weeks after powerful storm Eta devastated much of the region and left more than 200 people dead or missing.
(STR / AFP)

(AFP) - Hurricane Iota was barreling through Central America on Tuesday, hours after making landfall as the strongest Atlantic storm this year along a stretch of Nicaraguan coast devastated by a powerful storm just two weeks ago.

Authorities rushed to evacuate thousands of people from coastal areas of Nicaragua and Honduras in the immediate path of the storm.

The weather system has already left one person dead after sweeping the Colombian Caribbean island territory of Providencia, where it caused widespread damage.

Iota became the only Atlantic hurricane this year to reach Category 5 status -- the maximum level on the Saffir-Simpson wind scale -- soon before it made landfall in Nicaragua on Monday evening.

Hurricanes of that force destroy homes, wreck power supplies and most of the affected area is "uninhabitable for weeks or months," the NHC said.

The storm dropped to Category 4 before midnight and by 3:00 am Tuesday (0900 GMT) the storm had slowed substantially with sustained winds of 105 miles (165 kilometers) per hour.

The NHC forecasts Iota to weaken rapidly as it moves further inland and to dissipate over Central America by Wednesday.

Colonel John Fredy Sepulveda, the police chief on Providencia, said the local hospital had lost part of its roof and the territory of around 6,000 people was without power.

Hundreds of people living in Nicaragua's coastal indigenous communities near the city of Bilwi were still waiting to be evacuated earlier Monday after enduring the last devastating storm to hit the territory just weeks earlier.

"With Hurricane Eta we didn't get out, but this one is more dangerous," said Marisol Ingram, whose wooden home was badly damaged by Eta and was at risk of being swept away by Iota.

Eta made landfall in the same area as a Category 4 hurricane in early November before easing to a tropical storm, bringing widespread flooding and landslides that left 200 people dead.

The Atlantic has seen a record storm season this year with 30 named storms and 13 hurricanes.

Shelters in Nicaragua, already stretched by those made homeless by Eta, were being overwhelmed by new arrivals, Eufemia Hernandez, coordinator of a center at Uraccan University, told AFP.

"The wind is too strong, it took everything, the roof and the wooden windows of my house," said Jessi Urbina, a resident of the El Muelle neighborhood in Bilwi.

Prinsila Glaso, 80, told AFP that her community south of Bilwi had been "destroyed" in the wake of Eta, and the coming Hurricane Iota would leave little behind.

Other local residents said that the wind blew the roofs off of houses "like they were made of cardboard."

El Salvador declared a "red alert" ahead of the hurricane's projected path through Central America. Neighboring Guatemala, with vast areas still recovering from Eta, was also on high alert.

Iota had already caused strong gusts and heavy rainfall in parts of Honduras, according to disaster agency COPECO.

Local media reported that more than 175,000 people had been evacuated since Saturday, mostly in areas previously flooded by Eta.

The NHC warned that Iota would dump up to 20 inches (500 mm) of rain on Honduras, northern Nicaragua, southeast Guatemala and southern Belize, with isolated totals of up to 30 inches.