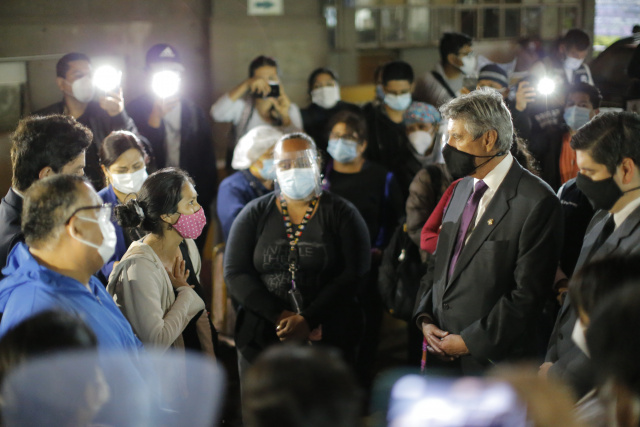 Peru's new interim President Francisco Sagasti (R), talks with Kerica Maylle, sister of 28-year-old Yoel Maylle, who who was severly injured last Saturday during a violent crackdown while taking part in a protest against the impeachment of former president Martin Vizcarra, at a hospital in Lima, on November 16, 2020. Peru's Congress on Monday chose a 76-year-old former World Bank official as the South American country's new president -- the third in a rollercoaster week of political upheaval. (Luka GONZALES / AFP)

(AFP) - Francisco Sagasti, sworn-in as Peru's interim president on Tuesday at the age of 76, is a novice politician with an academic background who has been a member of Congress only since March.

Yet his profile as a moderate has won him acceptance as a consensus politician in a nation seeking to navigate its way out of an intense political crisis.

Sagasti was elected president by Congress on Monday, after lawmakers had failed in a first attempt to agree on a candidate the day before.

The choice of an unknown as president may be a reflection of how crisis-worn Peru's politics have become.

The political centrist, whose gray beard and lanky frame has quickly earned him the nickname Don Quixote from his political admirers, is so far unblemished by the fray of repeated crises that have beset Peruvian politics.

While Cervantes’s hero jousted at windmills on a quest to restore chivalry and serve his nation, Sagasti's immediate task is to quell the seething anger in the streets at the ouster of popular president Martin Vizcarra and his replacement by ex-congress speaker Manuel Merino.

In a rare feat for Peruvian presidents, Vizcarra had consistently high approval ratings and broad public support for his crusade against political corruption -- especially in Congress, half of whose members are embroiled in criminal cases, ranging from money laundering to bribery.

Sagasti joined Congress after winning a seat in March as part of the Morado Party, a centrist grouping he co-founded in 2016 to offer an alternative to leftists and conservatives.

The party takes its name from the Spanish word for the color purple, what its founders said represents a mix of leftist red and the blue of the conservative parties.

The party took nine seats in the 130-seat Congress in polls that delivered a heavy defeat for right-wing parties and led to a highly-fragmented legislature.

Sagasti was one of the few members of Congress to vote against Vizcarra's impeachment, which analysts said may win him support from the street.

An industrial engineer by training, Sagasti was chairman of Congress' Committee on Science, Innovation and Technology before jumping into the spotlight as president.

He has taught at universities in Peru, Spain and the United States, where he also studied for a doctorate in social science.

More of a technocrat than a political animal, Sagasti also worked at the World Bank in the late 1980s.

Sagasti himself has been embroiled in an unlikely drama.

In 1996, he was caught up in the hostage crisis at the Japanese embassy in Lima, where leftist Tupac Amaru rebels held around 700 people attending a party for Emperor Akihito's birthday.

Sagasti was released after five days along with many of the foreign dignitaries.

The siege ended after 126 days when Peruvian special forces raided the embassy building, rescuing all but one of the remaining hostages -- who was killed in the gun battle -- as well as killing all the rebels.

It was an untypically stormy episode for the music lover, who plays piano and guitar as well as composes. Sagasti has been married three times and is father to seven children.

Under Peru's constitution, Sagasti will slot in as interim president until elections next year.