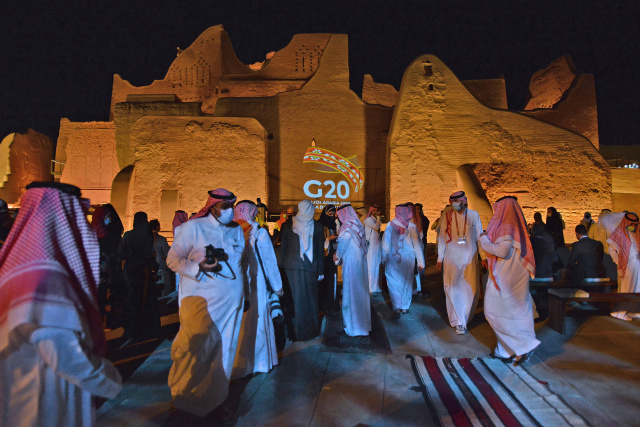 The G20 logo is projected at the historical site of al-Tarif in Diriyah district, on the outskirts of Saudi capital Riyadh, on November 20, 2020. Saudi Arabia hosts the G20 summit on November 21 in a first for an Arab nation, with the downsized virtual forum dominated by efforts to tackle a resurgent coronavirus pandemic and crippling economic crisis. (FAYEZ NURELDINE / AFP)

(AFP) - Saudi Arabia hosts the G20 summit Saturday in a first for an Arab nation, with the downsized virtual forum dominated by efforts to tackle the coronavirus pandemic and a crippling economic crisis.

The two-day meeting of the world's wealthiest nations comes as President Donald Trump refuses to concede a bitter election and campaigners criticise what they call the G20's inadequate response to the worst global recession in decades.

World leaders will huddle virtually as international efforts intensify for a large-scale roll out of coronavirus vaccines after a breakthrough in trials, and as calls grow for G20 nations to plug funding shortfalls.

Amid a raging pandemic, the summit, which is usually an opportunity for one-on-one engagements between world leaders, is reduced to brief online sessions of what some observers call "digital diplomacy".

Saudi Arabia's King Salman will preside over the summit, with sources close to the organisers saying climate change was among the issues topping the agenda.

Trump will also participate, a US official said.

G20 nations have contributed more than $21 billion to combat the pandemic, which has infected 56 million people globally and left 1.3 million dead, and injected $11 trillion to "safeguard" the virus-battered world economy, organisers said.

The Paris-based Organisation for Economic Cooperation and Development projects global economic output will contract by 4.5 percent this year.

"The G20 committed in March to do 'whatever it takes to overcome the pandemic and protect lives and livelihoods,'" UK Prime Minister Boris Johnson said in a statement.

"As we meet this weekend, we must hold ourselves to account for that promise."

The constituent nations extended a debt suspension initiative for developing countries until the end of June next year.

But UN Secretary-General Antonio Guterres urged G20 leaders to offer a "firm committment" to extend the initiative until the end of 2021.

International Monetary Fund managing director Kristalina Georgieva has warned that the global economy faces a hard road back from the Covid-19 downturn even as vaccines are now in sight.

G20 nations must help plug a $4.5 billion funding gap in the so-called ACT-Accelerator -- a programme that promotes an equitable distribution of COVID-19 vaccines -- to rein in the pandemic, said a joint statement signed by Norway's prime minister, South Africa’s president, the heads of the European Union and the World Health Organization.

US Secretary of State Mike Pompeo, a staunch Trump defender, will be present in Saudi Arabia during the summit.

Trump, who continues to reject his election loss, took part Friday in an Asia-Pacific summit.

Many of his fellow G20 leader have already congratulated President-elect Joe Biden.

Ahead of the summit, European Commission President Ursula von der Leyen said she hoped the US will adopt a more multilateralist stance under Biden.

"We also expect of course new momentum from the new US administration" on climate change, reversing Trump's withdrawal from the Paris climate accord, she added.

Key among them are the siblings of jailed activist Loujain al-Hathloul, on hunger strike for more than 20 days demanding regular family contact.

But some Western officials have indicated human rights would not be raised at the summit, saying they prefer to use bilateral forums to discuss the issue with the Saudi government.

"Instead of signalling its concern for Saudi Arabia's serious abuses, the G20 is bolstering the Saudi government's well-funded publicity efforts to portray the country as 'reforming' despite a significant increase in repression."

General » Be a reporter: Write and send your article » Subscribe for news alert
Tags: G20, summit