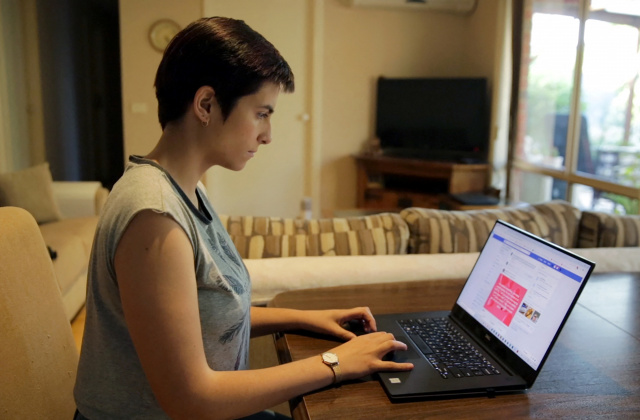 A photo taken in Melbourne on March 30, 2020 shows Hannah Koch, an administrator for the Victorian branch of the Facebook group Adopta Heathcare Worker whose goal is to match volunteer helpers with ‘adoptee’ healthcare workers struggling with increased work hours and stress from the pressures of fighting an unprecedented medical emergency that is unfolding across the globe. While social media has been widely blamed for spreading dangerous misinformation about COVID-19, tens of thousands of Australians are using their networks to support the health care workers risking their lives on the frontline of the pandemic.(Tracey Shelton / AFP)

(AFP) - Australia's government said Thursday that Facebook was "heavy-handed" and "wrong" for introducing an unprecedented local ban on sharing news in response to pending legislation that would force the social media giant to pay for content.

Treasurer Josh Frydenberg said the US firm gave no notice it would revoke users' ability to post links to news articles or view the Facebook pages of news outlets from anywhere in the world.

"Facebook was wrong. Facebook's actions were unnecessary, they were heavy-handed, and they will damage its reputation here in Australia," he said.

The surprise move early Thursday came as retaliation for laws proposed in Canberra that would force social media giants to pay for Australian news content shared on their sites.

Frydenberg said the government remained "absolutely committed" to implementing its plan, which passed the House of Representatives late Wednesday and is now before the Senate.

"What today's events do confirm for all Australians is the immense market power of these media digital giants," he said.

"These digital giants loom very, very large in our economy and on the digital landscape."

Facebook has been engaged a lengthy war of words with Canberra over its regulatory push, which tech firms fear could create a global precedent that could require dramatic changes and hit their business model.

Communications Minister Paul Fletcher had also raised concerns that blocking news media on the popular platform in Australia could boost the spread of misinformation.

"What they're effectively saying to Australians is, 'You will not find content on our platform which comes from an organisation which employs professional journalists, which has editorial policies, which has fact-checking processes'," he said.

"They're effectively saying, 'You will not find information that meets those standards of accuracy on our site'.

"That seems a very surprising position and one that is unlikely to be in the long-term interest of their brand."

Several non-news sites were also caught up in the blackout Thursday -- including government health departments, emergency services, charities, Indigenous groups and even Facebook's own page.

A Facebook spokesperson said it would reverse those inadvertent measures, with some accounts restored within hours.

The company said Australian media outlets were also blocked for users outside the country.

General » Be a reporter: Write and send your article » Subscribe for news alert
Tags: Australia, US, IT, media, Facebook