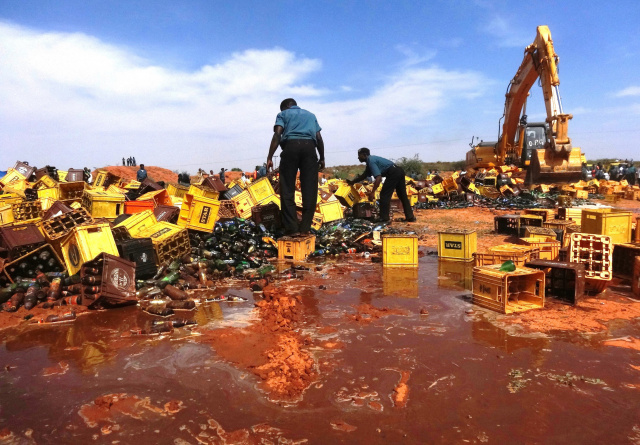 (FILE) Sharia enforcers called Hisbah destroy thousands of bottles of beer outside northern Nigeria's largest city of Kano on November 27, 2013. The Hisbah destroyed over 240,000 bottles of beer along with over 8,000 litres of local brew called "Burukutu" at a ceremony attended by Hisbah chiefs and government officials as part of sharia enforcement. Kano has banned the sales and consumption of alcohol since 2001 when it reintroduced strict sharia Islamic law in the predominantly muslim state. (AMINU ABUBAKAR / AFP)

(AFP) - Religious police in northern Nigeria's city of Kano have destroyed nearly four milllion bottles of beer, on grounds that sale and consumption of alcohol is prohibited in the predominantly Muslim region.

Sharia police called Hisbah often destroy alcohol and confiscated drugs, but the huge beer haul was one of the largest in a recently intensified crackdown.

Hundreds of Hisbah offloaded 3,873,163 bottles of mostly beer and some assorted alcoholic drinks on Wednesday in an open space in Tudun Kalebawa village.

Bulldozers then rolled over the bottles to cries of "Allahu Akbar" (God is Great) from the crowd, which included senior Hisbah and government officials.

The Hisbah set fire to the crushed remains and the blaze continued throughout the night, according to residents of Tudun Kalebawa.

"Kano is a sharia state and the sale, consumption and possession of alcoholic substances are prohibited in the state," Haruna Ibn Sina, the head of Hisbah, said at the ceremony.

"This is a demonstration that we are winning the war against drug abuse and all forms of intoxicants in Kano," he declared.

The beer had been confiscated from trucks making their way into the city from the mainly Christian south over several months, Hisbah spokesman Lawan Ibrahim Fagge told AFP on Thursday.

"The beer consignments were destroyed after securing a court order from a magistrate's court," Fagge said.

Kano is one of a dozen mainly Muslim northern states to have reintroduced a strict version of sharia law since since Nigeria returned to civil rule in 1999 after 15 years of military dictatorship.

Sale and consumption of alcohol are prohibited, and violators risk 80 lashes with a horsewhip.

The Hisbah has in recent times intensified crackdowns on drugs and alcohol sale in the state, where there is a high rate of drug abuse.

In December, youths in Kano's predominantly Christian neighbourhood of Sabon Gari clashed with Hisbah police when they tried to raid taverns and beer parlours in the area.

The mob set bonfires on the streets, prompting the deployment of regular police to restore order.