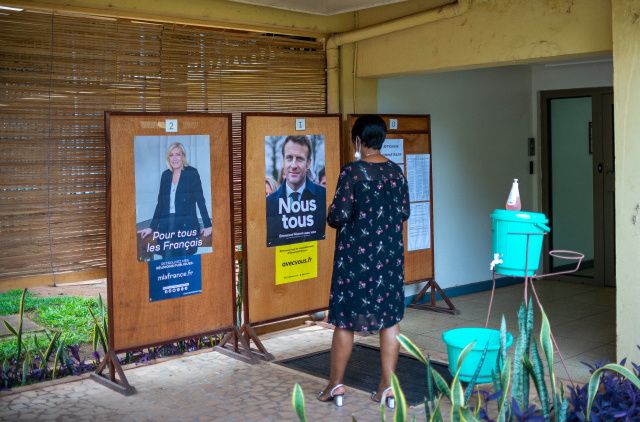 A woman looks at posters before casting a ballot in France's second round of Presidential elections, at the French Embassy in Bangui on April 24, 2022. French voters cast their ballots for the presidential run-off between centrist incumbent Emmanuel Macron and his far-right challenger Marine Le Pen, who is hoping to prove opinion polls wrong and become the first woman to win the country's highest public office. (Barbara DEBOUT / AFP)

(AFP) - French voters headed to the polls Sunday for the presidential run-off between centrist incumbent Emmanuel Macron and his challenger Marine Le Pen, whose far-right party appears set to have its strongest election showing ever.

Macron went into the election with a stable lead in opinion polls, an advantage he consolidated in the frenetic final days of campaigning, including a no-holds-barred performance in the pre-election debate.

But analysts have cautioned that Macron, who rose to power in 2017 aged 39 as the country's youngest-ever modern leader, can take nothing for granted given forecasts of low turnout that could sway the result in either direction.

The second round run-off is a repeat of the clash between Le Pen and Macron in 2017 when the centrist won 66 percent of the vote. But the margins are seen as being far narrower this time, with polls projecting a victory for Macron by around 10 percentage points.

At midday, voter participation stood at 26.4 percent, nearly two percentage points lower than at the same time five years ago, when Macron handily beat Le Pen in their first face-off.

But turnout was above the 25.5 percent seen at midday in the first round of voting on April 10, said the interior ministry, which will issue its next update on voter participation at 5:00 pm (1500 GMT).

"At times this campaign didn't have enough debate, but even so I was still able to make up my mind," said Cedric Kuster, a 35-year-old voter in Strasbourg, eastern France.

Le Pen beamed as she greeted supporters before casting her ballot in the northern town of Henin-Beaumont, a stronghold of her National Rally party.

Macron, meanwhile, worked a crowd of several hundreds before voting with his wife Brigitte in the Channel resort town of Le Touquet, where they own a holiday home.

Voting stations will close at 8:00 pm (1800 GMT), when preliminary results will be released that usually predict the final result with a high degree of accuracy.

Macron in particular is hoping that left-wing voters who backed other candidates in the first round will support the former investment banker and his pro-business, reformist agenda to stop Le Pen and her populist programme.

But far-left leader Jean-Luc Melenchon, who scored a close third-place finish in the first round, has pointedly refused to urge his millions of followers to back Macron while insisting they should not vote for Le Pen.

Macron himself repeatedly made clear that the complacency of stay-at-home voters precipitated the shocks of the 2016 elections that led to Brexit in Britain and Donald Trump's election in the United States.

Analysts have forecast that abstention rates could reach 26 to 28 percent, though the 1969 record for a second-round abstention rate of 31.1 percent is not expected to be beaten.

Another factor is that elections are being held in the midst of the Easter school break in much of France.

According to Martial Foucault, director of the CEVIPOF political studies centre, a high abstention rate will narrow the gap between Macron and Le Pen, describing this as a "real risk" for the president.

The stakes are huge for both France and Europe, with Macron pledging reform and tighter EU integration while Le Pen, who would be France's first female president, insists the bloc should be modified in what opponents describe as "Frexit" by another name.

Macron has also opposed Le Pen's plan to make it illegal to wear the Muslim headscarf in public, though her team has walked back on the proposal ahead of the vote, saying it was no longer a "priority".

They have also clashed on Russia, with Macron seeking to portray Le Pen as incapable of dealing with the invasion of Ukraine due to a loan her party took from a Russian-Czech bank.

Macron would be the first French president to win re-election in two decades since Jacques Chirac in 2002.

If elected, he is expected to address supporters on the Champ de Mars in central Paris at the foot of the Eiffel Tower.