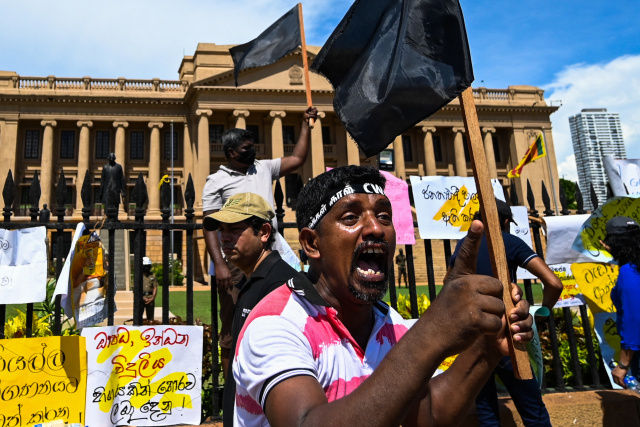 Protestors participate in an ongoing anti-government demonstration outside the President's office in Colombo on April 28, 2022, following a one-day general strike called by trade unions in support of calls for President Gotabaya Rajapaksa to resign over the worsening economic crisis. (ISHARA S. KODIKARA / AFP)

(AFP) - Millions of workers staged a crippling strike in Sri Lanka on Thursday, adding to pressure on President Gotabaya Rajapaksa and his ruling family to quit over the country's worst-ever economic crisis.

The island nation of 22 million people has been hit by months of acute shortages of food, fuel and medicines, prompting widespread protests.

But Thursday's nationwide strike was the first time the entire country had been brought to a standstill since the demonstrations began, with both state and private sector employees taking part.

Rajapaksa invited leaders of his party to discuss the crisis on Friday, but former coalition partner the Sri Lanka Freedom Party (SLFP) said they will not attend and instead told him to step down.

Prime Minister Mahinda Rajapaksa, Gotabaya's elder brother and a former two-term president, has said he is confident he will not be fired over the crisis.

"Today is like a public holiday in the country," a police official monitoring the situation, speaking on condition of anonymity, told AFP. "Hospitals are treating only emergency cases."

Across the nation, vegetable markets were closed, while tea plantations, a main export earner, were also shut, residents and local media said.

Tens of thousands of workers in the country's free trade zones came out of their factories and staged protests demanding the powerful Rajapaksa family step down.

Most banks were closed while a few provided reduced hours of service.

On the brighter side, a daily power cut that has become a feature of the crisis was not implemented Thursday as electricity employees took part in the work stoppage.

By afternoon, shops across the country had closed in solidarity with the trade unions, local television reported.

Union leader Ravi Kumudesh said Thursday's action was a success and issued a one-week deadline to Rajapaksa to step down or face a continuous strike.

"What we are asking the Rajapaksa family is to go within a week," Kumudesh said in a statement. "If they don't we are ready to launch another island-wide strike until they leave."

The country's economic crisis took hold after the coronavirus pandemic hammered income from tourism and remittances from Sri Lankans abroad. Protesters also blame the Rajapaksa clan for years of mismanagement.

The government has defaulted on its $51 billion external debt and is in talks with the International Monetary Fund for an emergency bailout.

Unable to pay for fuel imports, utilities have imposed daily blackouts to ration electricity, while long lines of people snake around service stations for diesel, petrol and kerosene.

Hospitals are short of vital medicines and the government has appealed to citizens abroad for donations.

Thousands of demonstrators have been camped for weeks outside the president's seafront office calling on him to resign.