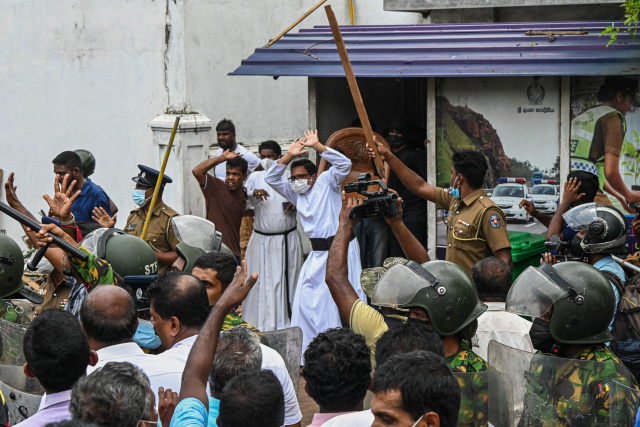 Demonstrators and government supporters clash outside the official residence of Sri Lanka's Prime Minister Mahinda Rajapaksa, in Colombo on May 9, 2022. Sri Lankan Prime Minister Mahinda Rajapaksa quit on May 9 after a day of violence saw three people including an MP killed and over 150 wounded as government supporters armed with sticks and clubs attacked protestors. (ISHARA S. KODIKARA / AFP)

(AFP) - Sri Lankan police have been ordered to go on the offensive and use live ammunition to prevent "anarchy", a top official told AFP Wednesday after another night of sporadic arson attacks.

Police say eight people have died since Monday, when frustration at a dire economic crisis erupted into violence between backers and opponents of President Gotabaya Rajapaksa, injuring over 200.

Even with a curfew and thousands of security forces told to "shoot on sight" to prevent further unrest, a luxury hotel said to belong to a Rajapaksa relative was set ablaze Tuesday evening.

"It is no longer spontaneous anger, but organised violence," the senior security official said on condition of anonymity.

"If the situation is not brought under control, there could be total anarchy."

He said the 85,000-strong police "have been asked to adopt an offensive stance", and have been ordered to use live ammunition against troublemakers.

As well as the hotel fire, on Tuesday evening police said they shot into the air at two locations to disperse mobs trying to torch vehicles.

They also stepped up security for several judges, saying they were targeted too.

On Wednesday, protestors defied the curfew and remained camped out in front of the president's office.

"We want the whole Rajapaksa clan out because they are so, so corrupt. They have been eating into Sri Lanka like a caterpillar eating into some fruit or leaf," activist Kaushalya Fernando told AFP.

In a tweet, Rajapaksa on Wednesday called for "all Sri Lankans to join hands as one, to overcome the economic, social & political challenges".

But the main opposition SJB party reiterated they will not be a part of any government with Rajapaksa still president, even after his brother Mahinda's resignation as prime minister on Monday.

Rajapaksa's government in 2020 restored the president's constitutional right to appoint and fire ministers as well as judges.

"In the guise of angry mobs, violence is being incited so military rule can be established," SJB head Sajith Premadasa tweeted.

"Rule of law should be maintained through the constitution not with GUNS. It is time to empower citizens not disempower them."

Sri Lankans have been suffering shortages of essential goods, fuel and medicines for months in the island's worst downturn since independence in 1948.

But the crisis moved into a darker phase on Monday when government supporters with sticks and clubs attacked demonstrators who had been protesting peacefully for weeks demanding the president's resignation.

Mobs then retaliated across the country late into the night, torching dozens of homes of ruling-party politicians.

Mahinda Rajapaksa had to be rescued in a pre-dawn military operation on Tuesday and taken to a naval dockyard for safety after protesters tried to storm his official residence.

One ruling-party politician gunned down two people on Monday night after his car was surrounded. Another shot dead a 27-year-old man and them himself, police said.

Echoing the UN rights chief and the European Union, the United States on Tuesday said it was concerned both with the violence and the deployment of the military.

"We stress that peaceful protesters should never be subjected to violence or intimidation, whether that's on the part of the military force or civilian units," State Department spokesman Ned Price told reporters.

India, meanwhile, was forced to deny social media rumours -- some using old images of Mahinda boarding a helicopter -- that it was helping family members to flee.

"The High Commission would like to categorically deny speculative reports in sections of media and social media about India sending her troops to Sri Lanka," it said.

With vital tourism torpedoed by the pandemic, Sri Lanka last month defaulted on its foreign debts of $51 billion, some of it stemming from Rajapaksa vanity projects built with Chinese loans.

The International Monetary Fund this week began a "virtual mission" of staff-level talks on a possible bailout.

IMF mission chief Masahiro Nozaki said the lender aimed to be "fully prepared for policy discussions once a new government has been formed."

General » Be a reporter: Write and send your article » Subscribe for news alert
Tags: SriLanka, politics