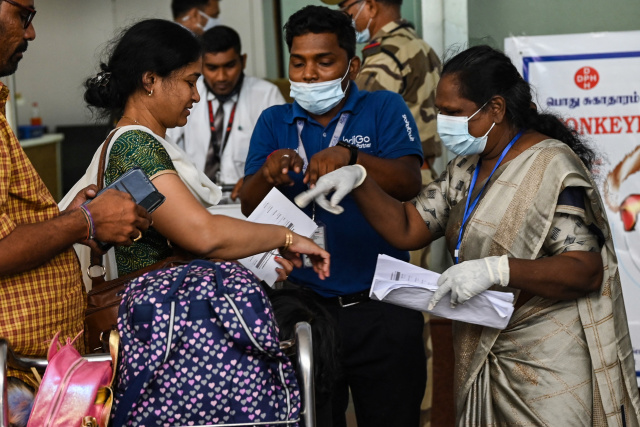 (AFP) - The risk of monkeypox becoming established in non-endemic nations is real, the WHO warned Wednesday, with more than a thousand cases now confirmed in such countries.

World Health Organization chief Tedros Adhanom Ghebreyesus said the UN health agency was not recommending mass vaccination against the virus, and added that no deaths had been reported so far from the outbreaks.

"The risk of monkeypox becoming established in non-endemic countries is real," Tedros told a press conference.

The zoonotic disease is endemic in humans in nine African countries but outbreaks have been reported in the past month in several other states -- mostly in Europe, and notably in Britain, Spain and Portugal.

"More than 1,000 confirmed cases of monkeypox have now been reported to WHO from 29 countries that are not endemic for the disease," Tedros said.

"Some countries are now beginning to report cases of apparent community transmission, including some cases in women."

Greece on Wednesday became the latest country to confirm its first case of the disease, with health authorities there saying it involved a man who had recently travelled to Portugal and who was in hospital in a stable condition.

The initial symptoms of monkeypox include a high fever, swollen lymph nodes and a blistery chickenpox-like rash.

Tedros said he was particularly concerned about the risk the virus poses to vulnerable groups, including pregnant women and children.

He said the sudden and unexpected appearance of monkeypox outside endemic countries suggested that there might have been undetected transmission for some time, but it was not known for how long.

One case of monkeypox in a non-endemic country is considered an outbreak.

Tedros said that while this was "clearly concerning", the virus had been circulating and killing in Africa for decades, with more than 1,400 suspected cases and 66 deaths so far this year.

"The communities that live with the threat of this virus every day deserve the same concern, the same care and the same access to tools to protect themselves," he said.

In the few places where vaccines are available, they are being used to protect those who may be exposed, such as healthcare workers.

He added that post-exposure vaccination, ideally within four days, could be considered for higher-risk close contacts, such as sexual partners or household members.

Tedros said the WHO would issue guidance in the coming days on clinical care, infection prevention and control, vaccination and community protection.

He said people with symptoms should isolate at home and consult a health worker, while people in the same household should avoid close contact.

Few hospitalisations have been reported, apart from patients being isolated, the WHO said at the weekend.

Sylvie Briand, the WHO's epidemic and pandemic preparedness and prevention director, said the smallpox vaccine could be used against monkeypox, a fellow orthopoxvirus, with a high degree of efficacy.

The WHO is trying to determine how many doses are currently available and to find out from manufacturers what their production and distribution capacities are.

General » Be a reporter: Write and send your article » Subscribe for news alert
Tags: monkeypox, WHO