Eight men own half the world's wealth: Oxfam 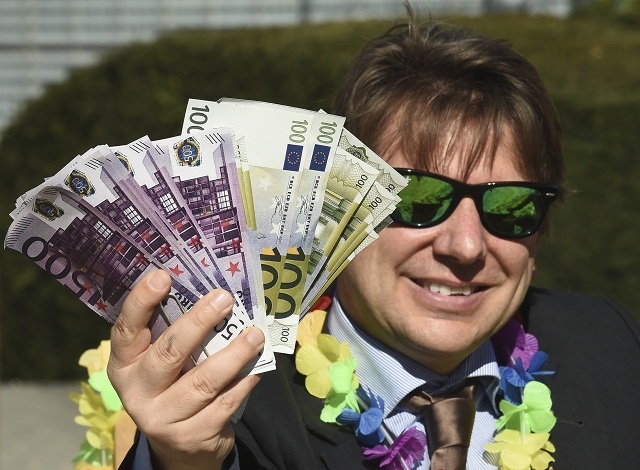 An activist performs as a client of an offshore company during a protest of the non-governmental organizations 'Oxfam' and 'Transparency International' in front of the European Commission headquarters in Brussels, on April 12, 2016. Following the Panama Papers revelations, Oxfam criticizes the EU Commission's delay of financial reforms. Commissioner Jonathan Hill is expected to present a list of reforms in Strasbourg, France, later on April 12.
(JOHN THYS / AFP)

(AFP) - Eight men own the same wealth as half the world's population, a level of inequality which "threatens to pull our societies apart", Oxfam said on Monday ahead of the World Economic Forum opening in Davos.

The wealth of the world's poorest 3.6 billion people is the equivalent to the combined net worth of six American businessmen, one from Spain and another from Mexico.

Oxfam pointed to a link between the vast gap between rich and poor and growing discontent with mainstream politics around the world.

"From Brexit to the success of Donald Trump's presidential campaign, a worrying rise in racism and the widespread disillusionment with mainstream politics, there are increasing signs that more and more people in rich countries are no longer willing to tolerate the status quo," Oxfam said in its new report, "An economy for the 99 percent".

The charity said new data on wealth distribution from countries such as India and China had prompted it to revise its own calculation, having said a year ago the wealth of half the world's population was in the hands of 62 people.

Inequality will be among the issues topping the agenda as the world's political and business elite meet in Davos from Tuesday until Friday, when 3,000 people will gather for the annual meeting of the World Economic Forum.

"Responsive and responsible leadership" has been chosen as the theme of the summit, which organisers said was a response to a "backlash against globalisation leading to two surprising vote results and a rise in populism in the West".

In its report Oxfam called for an increase in tax rates targeting "rich individuals and cooperations", as well as a global agreement to end competition between countries to lower corporate tax rates.

The charity also decried lobbying by corporations and the closeness of business and politics, calling for mandatory public lobby registries and stronger rules on conflicts of interest.