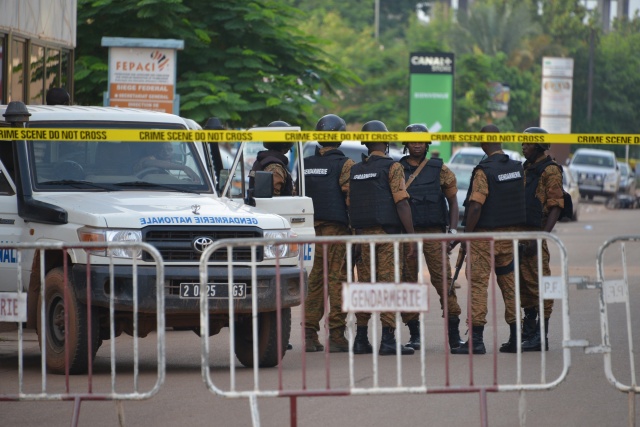 Burkinabe police patrol on August 14, 2017 in Ouagadougou, following a deadly attack by gunmen on a restaurant. Security forces in the Burkina Faso capital early August 14 concluded an operation against suspected jihadist gunmen who launched a deadly attack on a restaurant, the communications minister announced. "The operation has ended" but searches of the Ouagadougou neighbourhood around the restaurant are continuing, the minister, Remis Dandjinou, told a press briefing carried on social media. He confirmed a total of "18 dead" since the attack began Sunday night, with "two terrorists" killed. (Ahmed OUOBA / AFP)

(AFP) - Security forces in Burkina Faso's capital ended an assault Monday against suspected jihadists who opened fire on a restaurant in a "terrorist attack" that left at least 18 people dead, the government said.

The attack that began Sunday night in a Turkish restaurant popular with foreigners also left a dozen people injured, while two assailants were later killed, Communications Minister Remis Dandjinou said. It was not clear how many gunmen were involved.

"The operation has ended" but searches are continuing in the Ouagadougou neighbourhood around the restaurant, Dandjinou told a press briefing carried on social media.

The Istanbul restaurant is just 200 metres from a hotel and cafe targeted in an assault in January 2016 that left 30 people dead and 71 wounded, many of them foreigners. That attack was claimed by the Al-Qaeda in the Islamic Maghreb (AQIM) group.

"According to witnesses, at least two assailants arrived on a motorcycle around 9pm armed with Kalashnikovs, opened fire on the Istanbul restaurant," a police officer told AFP on condition of anonymity.

A waiter in the restaurant said he saw "three men arrive on a 4X4 vehicle around 9:30 pm, get off the vehicle and open fire on customers seated on the terrace".

Shooting ended around 5 am (0500 GMT), according to an AFP journalist who was near the restaurant.

Dandjinou had earlier said that "some people were held" by the assailants and that "some were released", but gave no further details.

He said the 18 victims were of different nationalities, both Burkinabes and foreigners. Turkey said one of its citizens was among the dead.

Security forces launched a counter-assault at around 10:15 pm against the assailants who were hiding in the building, the police officer said.

The shooting was intense at first and then sporadic, an AFP journalist said.

Video footage posted on Twitter showed people fleeing, as shouting and gunshots are heard. Armed officers in uniform are then seen walking towards the attack site.

An earlier government statement described the shooting as a "terrorist attack."

The wounded were taken to Yalgado Ouedraogo hospital.

"We are overwhelmed," one surgeon told AFP on condition of anonymity.

"We have received about a dozen wounded, including three who have died. The condition of the other wounded is critical. Three of them are currently being operated on."

Burkina Faso, a poor landlocked nation bordering Mali and Niger, has seen a string of attacks claimed by jihadist groups in recent years.

In December 2016, a dozen soldiers were killed in an assault on their base in the north of the country. And in October that year there was an attack that killed four troops and two civilians.

In the January 2016 assault, AQIM gunmen attacked the Splendid hotel and the Cappuccino restaurant opposite, both popular with Westerners.

AQIM named the three gunmen responsible and published photos of them, dressed in military fatigues and wielding weapons.

The hotel and cafe attack came weeks after jihadists claimed an assault on a top hotel in Bamako, capital of neighbouring Mali, that killed 20 people.

There have also been kidnappings -- of Burkinabes as well as foreigners. An Australian and a Romanian, abducted in 2015, are still being held hostage by Islamist groups affiliated with Al-Qaeda.

Africa » Be a reporter: Write and send your article » Subscribe for news alert
Tags: Burkina, attack