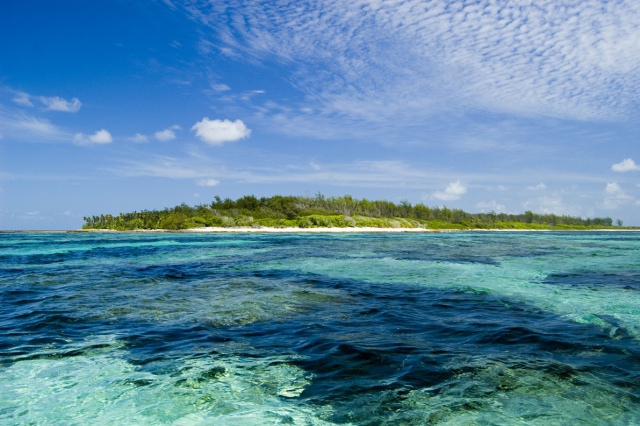 Low-lying islands of the Seychelles could face disastrous effects if carbon emission targets to curtail climate change are not met in UN conference to be held in Paris starting November 30 to December 15. (Gerard Larose, Seychelles Tourism Board)

(Seychelles News Agency) - The French capital, Paris, is gearing up to welcome nearly 200 world leaders from November 30 to December 11, 2015, who will strive to achieve a legally binding agreement on climate change.

The meeting will seek to get each country to commit to reducing their greenhouse gas emissions with the aim of keeping global warming below 2 degrees Celsius.

Less than a week before the start of the much-anticipated event, Seychelles, one of the smallest island nation's in the world is ready with the main message it will be taking to the 21st session of the Conference of Parties (COP 21) also referred to as the 2015 Paris Climate Conference.

Keep it below 1.5 degrees Celcius

The Indian Ocean archipelago of 115 islands with a population of around 93,000 people is proposing for the global temperature to be kept below 1.5 degrees.

“We are saying below 1.5 degrees Celsius because it is important to our survival, that is why we have to push for this,” Wills Agricole, the Seychelles Principal Secretary for Climate Change and Energy told SNA in an interview.

It is to be noted that Seychelles had already highlighted its stance to be vocal in its plea to limit the global temperature to below 1.5 degrees Celcius at a number of international gatherings that have been organised in the lead up to the upcoming COP 21 meeting.

The island nation that is part of the Alliance of Small Islands States (AOSIS) has also joined fellow island states to have a common position in preparation for the final conference in Paris.

Seychelles like other small island nations remain vulnerable to the effects of climate change, that are already being felt today.

The western Indian ocean island is not new to water shortage, for example, which is a global concern caused by changes in rainfall patterns. Coral bleaching, coastal erosion and rising sea level are some of the other imminent threats.

According to the 2014 assessment report by the United Nations' Intergovernmental Panel on Climate Change (IPCC), the world’s sea levels are predicted to rise 30 to 90 centimetres by 2100.

In the case of Seychelles, should the seas rise to these levels, this may result in the loss of up to 70 percent of land masses - especially in coastal areas where many of the 90,000 people reside and on coralline islands, which are barely a metre or two above sea level.

A focus on renewable energy to help reduce gas emissions

The Intergovernmental Panel on Climate Change also reported in 2013 that the combined land and ocean temperature had indicated a global warming level of 0.85C between 1880 and 2012.

Taking this into account, all countries are also hard at work preparing to submit their Intended Nationally Determined Contribution (INDC), which is a list of climate actions they intend to take to help reduce global warming, once a legally binding agreement is reached.

“Each party has to bring forward their national plan of action to help in the reduction of greenhouse gas emissions. Seychelles’ INDC proposes to assist in the gas reduction emission by 25 percent by the year 2025 and 29 percent by 2030,” said Agricole.

Seychelles has already embarked on various projects geared towards a low–carbon future and these include the increased use of renewable energy.

The Seychelles Energy Policy for 2010-2030, which was completed in 2010, aims to guide the Indian Ocean archipelago of 115 islands towards reducing its consumption of fossil fuels by 15 percent by the year 2030.

The small island developing state, which relies mainly on tourism and tuna fisheries to sustain its small economy, is heavily dependent on imported diesel to run generators that produce the electricity required by the country’s 93,000 inhabitants and tourism establishments.

With the island nation currently producing around 4.5 percent of its energy requirements from renewable sources, the environment, climate change and energy ministry is confident that the country should be able to meet that 15 percent target by 2020 due to several initiatives.

One of the major components of the endeavour to achieve the ambitious target is increased investment in the production of electricity using solar energy.

“The aim is that by 2030, most residential buildings [in Seychelles] will have solar panels on their roof tops,” Agricole told SNA.

SIDS ambitious programmes to switch to renewable energy at US event

Seychelles' efforts to increase its use of renewable energy has in fact been highlighted at a recent event in the US capital, Washington DC.

The island nation’s climate change Ambassador Ronny Jumeau was among representatives of several foreign nation's who addressed the “Global Solutions to Climate Change” forum. The event was organised by Democrat members of the House of Representatives Committee on Energy and Commerce, and the House Sustainable Energy and Environment Coalition (SEEC).

The aim was to allow the speakers to highlight the unique challenges being faced by their respective countries, their existing efforts to adapt and mitigate the effects of climate change as well as their expectations of the outcome of the Paris Conference.

According to a press statement issued by the Seychelles Ministry of Foreign Affairs and Transport, Jumeau stressed that SIDS, including the Seychelles islands, although they are least responsible for climate change remain the most vulnerable.

He also added that these islands were setting an example for major emitters through their various ambitious programmes to switch to renewable energy and submitting their own climate pledges, known as the Intended Nationally Determined Contributions to the Paris conference.

In the face of all these efforts, Seychelles is also conscious that mitigation and adaptation measures also play a key role in dealing with the effects of climate change.

According to Agricole, projects already earmarked include coastal rehabilitation, projects to reduce the islands vulnerability to flooding, building resilience for communities, biodiversity laws to enforce the archipelago’s border, an increase in water storage capacity and the development for a sustainable and modern agriculture system.

Funding for such mitigation and adaptation measures, however, is another subject that remains one of the biggest headaches for small island nations, which is expected to be tackled at the December meeting.

At the 16th Session of the Conference (COP 16) in Cancun, Mexico in 2010, a Green Climate Fund was set up as a Financial Mechanism under the UNFCC to assist developing countries with their local projects.

As of November 2015, the Green Climate Fund had raised $10.2 billion equivalent in pledges from 38 state governments to be used by developing countries.

“At the COP 21 meeting all the parties will discuss how much of this money can be made available for their respective projects geared towards climate change mitigation and adaptation,” says Agricole who is also the focal point for the Green Climate Fund in Seychelles adding that access to funding is important if Seychelles is to achieve its target to reduce its carbon emission.

Advanced economies have formally agreed to jointly mobilize $100 billion per year, by 2020 for the Green Climate Fund.

Seychelles innovative debt-for-adaptation swap gets off the ground

Meanwhile, Seychelles is not relying solely on what it can get fro the green climate fund, but has taken its own initiative to source innovative financing for sustainable development and to tackle climate change.

The Seychelles Finance, Trade and Blue Economy Minister Jean Paul Adam said in March this year that France, the United Kingdom, Belgium, South Africa and Italy had agreed to the debt swap.

In a press statement issued on Monday, the island nation’s environment, energy and climate change ministry announced that bilateral agreements for the debt buyback had been signed with government representatives three of those countries; France, Belgium and Italy.

The agreements were signed in the margins of the 3rd Edition of the Paris Forum on Debt and Development which was held last week.

These agreements should be concluded before December 15 when the debt swap will be formally completed with the Seychelles creditors.