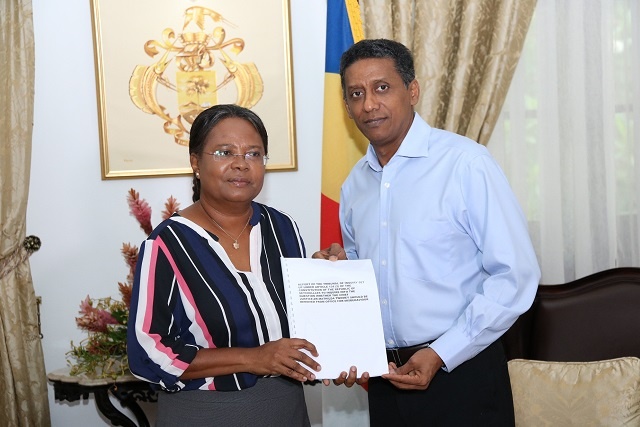 The Secretary to the Tribunal presented the report to President Faure on Friday. (Patrick Joubert)

(Seychelles News Agency) - A tribunal set up in Seychelles to investigate complaints of misbehaviour by Chief Justice, Mathilda Twomey has concluded that the evidence does not support allegations of misconduct on the part of the Chief Justice.

The Tribunal of Inquiry submitted its report to the Constitutional Appointments Authority (CAA) and President Danny Faure at State House on Friday.

In a statement to the press, the Constitutional Appointments Authority said that the overall conclusion came after examining all the evidence.

“It follows that no action should be taken by the President under Article 134 of the Constitution in respect of the office of Chief Justice,” the report stated.

In a short statement to the press, the Chief Justice said she is very happy with the outcome of the Tribunal and thanks her legal team, her family and friends for their support.

The Tribunal was set up in May and the CAA had stated that it was “satisfied that a prima facie case of misbehaviour had been found and that the issues should be further inquired into by a tribunal appointed as per Article 134 of the Constitution.”

A tribunal set up by the Constitutional Appointment Authority of Seychelles to investigate complaints of misbehaviour by the Chief Justice, Mathilda Twomey, will start

The Tribunal held its first session in June to consider the applications of people who believe they might be affected by the case. The hearing of evidence started on July 30 and concluded on August 2.

The members of the Tribunal comprised of three judges from the Commonwealth, Michael Adams from Australia, John Murphy from South Africa and Olufunmilayo Olajumoke Atilade from Nigeria.

Twomey was appointed the Chief Justice of the Seychelles Supreme Court in August 2015, becoming the first Seychellois woman to be appointed to the post. The case against her followed complaints brought forth by suspended Supreme Court Judge Durai Karunakaran.

Justice Karunakaran was suspended under Article 134 in October 2016 following a decision by the CAA to refer the judge to an investigative court for an investigation into his professional conduct.

The Tribunal had four relevant charges to inquire into and these included the Chief Justice’s abuse of her authority of office, destruction of evidence in a case heard by Karunakaran, publication of a report recommending the removal of the Supreme Court judge to the President and the Chief Justice communications with the CAA in connection with Karunakaran’s fitness for office.

Justice Karunakaran had also filed a case against the former CAA, saying that he did not get a chance to be heard after he was suspended on October 10, 2016. The case was dismissed in June by the Supreme Court on the grounds that the CAA had no legal obligations to allow Karunakaran to be heard.

General » Be a reporter: Write and send your article » Subscribe for news alert
Tags: Tribunal of Inquiry, Constitutional Appointments Authority