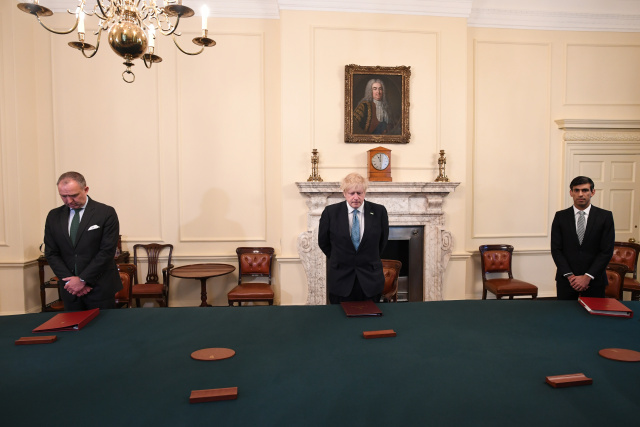 (L-R) Cabinet Secretary Mark Sedwill, Britain's Prime Minister Boris Johnson and Britain's Chancellor of the Exchequer Rishi Sunak pause for a minute's silence to honour UK key workers, including NHS staff, health and social care workers, who have died during the coronavirus outbreak inside 10 Downing Street, central London on April 28, 2020. Britain's health ministry on April 27 the total toll of those having died after testing positive for COVID-19 in hospital rose to 21,092. The figure includes 82 staff from the National Health Service and 60 social care workers, according to minister Matt Hancock. (Stefan Rousseau / POOL / AFP)

(AFP) - British Prime Minister Boris Johnson is self-isolating after someone he was in contact with tested positive for the coronavirus, a spokesman said Sunday.

"He will carry on working from Downing Street, including on leading the Government's response to the coronavirus pandemic," the Downing Street spokesman added.

His confinement comes as negotiations with the European Union over Brexit enter a decisive final sprint, with critical announcements being trailed -- ahead of Johnson's isolation -- by Downing Street to tackle the virus.

The prime minister was informed that he should self-isolate after being contacted by the country's Test and Trace scheme.

Johnson was hospitalised with the coronavirus in April. This time around, "the PM is well and does not have any symptoms of Covid-19", the spokesman said.

A source added that Johnson, who was severely affected during the earlier bout, feels "good" and that the PM would continue to work, "in particular to lead the government's response to the coronavirus pandemic".

Downing Street has not said how long Johnson will be in isolation for. However, the UK National Health Service rules state individuals should isolate for 14 days.

The PM intends to address the country during his confinement, Downing Street said.

The announcement came after Johnson met a small group of MPs at Downing Street on Thursday for around 35 minutes, including one who subsequently developed symptoms of Covid-19 and has now tested positive.

Johnson's self-isolation risks upsetting a busy week as the UK enters its third week of reimposed restrictions and the PM was due to chair a series of key Covid-19 meetings.

The renewed stay-at-home restrictions and business closures came into force earlier this month and have been met with scepticism that they can halt the worst death toll from the virus in Europe.

The UK is supposed to be returning to a regionalised approach -- lifting the sweeping lockdown currently in place -- from December 2.

But the country remains hard hit, recording more than 50,000 deaths linked to the coronavirus from over 1.3 million positive cases.

Johnson, 56, spent three nights in intensive care when he got Covid-19, later crediting hospital staff with saving his life.

The British leader has said that his coronavirus case was seriously worsened by being overweight, but that he had since lost 26 pounds (12 kilograms).

"I am going to continue that diet, because you've got to search for the hero inside of yourself, in the hope that that individual is considerably slimmer," he joked last month.