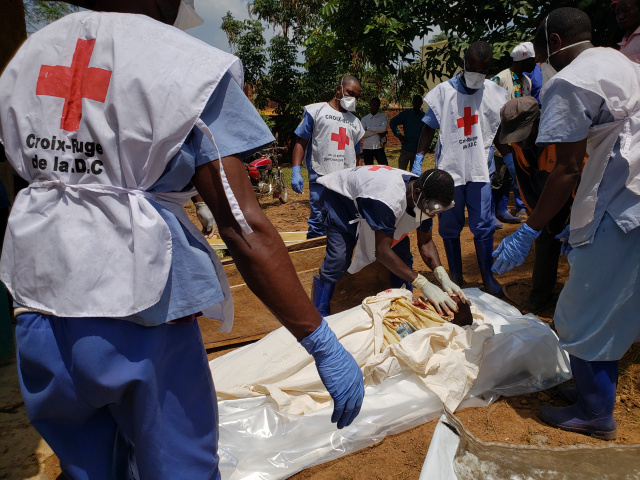 Democratic Republic of Congo's Red Cross members wearing gloves and masks handling dead bodies in Mangina on February 10, 2020, that were brought to the Mangina hospital morgue on February 9, 2020, following an attack on February 8, 2020 in Mangina. (Seros MUYISA / AFP)

(AFP) - DR Congo on Wednesday declared the end of its latest Ebola epidemic, closing the file on an outbreak in the northwestern province of Equateur that claimed 55 lives in nearly six months.

"I am happy to solemnly declare the end of the 11th epidemic of the Ebola virus," Health Minister Eteni Longondo told journalists.

The World Health Organization said the latest outbreak had killed 55 people among 119 confirmed and 11 probable cases since June 1.

Wednesday's announcement came after the Democratic Republic of Congo crossed a threshold of 42 days without a recorded case -- double the period that the deadly haemorrhage virus takes to incubate.

As during a preceding epidemic in the east of the country, the widespread use of vaccinations, which were administered to more than 40,000 people, helped curb the disease, the WHO said.

The outbreak in Equateur erupted as Ebola fighters were still battling the epidemic in the east and amid tough measures, since eased, to combat the coronavirus.

The outbreak "occurred in a particular context," Longondo said.

He added that it unfolded in an area of rivers and lakes whose remoteness fuelled the risk of its spreading to other provinces and the neighbouring Republic of Congo.

"There remains a high risk of a resurgence, and this should be an alarm signal for strengthening the monitoring system," the minister warned.

The US Centers for Disease Control and Prevention (CDC) hailed the "tremendous accomplishment, particularly in the midst of the Covid-19 pandemic".

Doctors Without Borders (MSF) said that "implementing a decentralised, community-focused approach", as well as having a licenced vaccine and new treatment options meant that "health care workers are better prepared to fight Ebola than ever before."

But the International Federation of the Red Cross warned the DRC still faced "significant humanitarian challenges".

The UN's humanitarian coordinator in the DRC, David McLachlan-Karr, called for continued efforts to beef up the country's health system.

- Lessons from the east -

The DRC and its partners vowed that the fight against Ebola in the northwest would draw on lessons from experiences in the east, especially regarding corruption.

The US, British and Canadian ambassadors to the DRC stoked the pressure for better financial controls after going on a fact-finding mission to the northwest in September with pioneering Congolese epidemiologist Jean-Jacques Muyembe, who helped identify the Ebola virus in 1976.

"People see this kind of epidemic as a chance to get rich, either in the private sector or through the various channels of the state," the Canadian envoy Nicolas Simard said.

In Mbandaka, the capital of Equateur, Simard said he had discovered that more than 4,000 people had been deployed there to fight Ebola, even though there had only been 120 cases of the disease.

Longondo said in Wednesday's press conference that he had sought to avoid Ebola profiteering in Equateur.

But he acknowledged there had been problems, and a task that he thought would take "two or three months ended up taking five or six."

"Some people in the health sector inflated the list of service providers," he said.

"It took us time to sort out these problems. That's why we didn't pay people on time and this led to strikes."

It was also the second highest toll in the 44-year history of the disease, surpassed only by a three-country outbreak in West Africa from 2013-16 that killed 11,300 people.

These are often followed by vomiting and diarrhoea, skin eruptions, kidney and liver failure, and internal and external bleeding.

The death rate is notoriously high, ranging up to 90 percent in some outbreaks, according to the WHO.

The DRC is also fighting the Covid-19 pandemic.

In a population of around 80 million people, the authorities have recorded more than 11,000 Covid-19 cases, at least 300 of which have been fatal.

General » Be a reporter: Write and send your article » Subscribe for news alert
Tags: DRCongo, Ebola