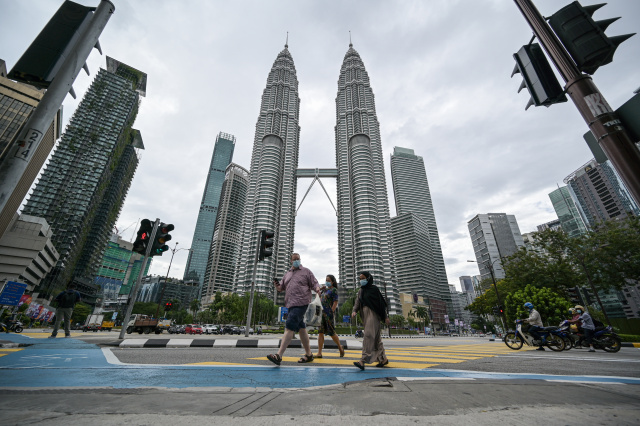 Pedestrians cross a road in front of Malaysia’s landmark Petronas Twin Towers in Kuala Lumpur on January 12, 2021, as Malaysian authorities were set to impose tighter restrictions to try to halt the spread of the Covid-19 coronavirus. (Mohd RASFAN / AFP)

(AFP) - Malaysia's king declared a nationwide state of emergency Tuesday to fight a coronavirus surge that is overwhelming hospitals, but critics charged it was a bid by an unstable government to cling to power.

The announcement came a day after the prime minister introduced sweeping new curbs across much of the Southeast Asian nation, including the closure of most businesses, and warned the health system was "at breaking point".

Sultan Abdullah Sultan Ahmad Shah agreed to declare an emergency until August 1 following a request from Prime Minister Muhyiddin Yassin in a Monday meeting, the national palace said in a statement.

In a televised address, Muhyiddin said parliament would be suspended and elections would not take place, with the king able to enact new laws if necessary.

But the leader, whose 10-month-old government faces a host of challenges, insisted that "the civilian government will continue to function".

"The emergency declaration... is not a military coup and a curfew will not be enforced," he said.

He insisted he was committed to holding a general election once the country's outbreak is brought under control.

The announcement came after Muhyiddin's key coalition allies threatened to withdraw support, which could have led to the collapse of the government and snap national polls that some feared could worsen the outbreak.

Malaysia kept the virus in check for much of last year with a tough lockdown but, once curbs were eased, cases accelerated and have repeatedly hit fresh records in recent days.

As well as suspending political life, the declaration gives the government powers to take over private hospitals as government facilities become overwhelmed, and get extra help from the military and police, Muhyiddin said.

The emergency could be lifted earlier if the rate of infection slows.

An election in the state of Sabah last year has been blamed for triggering a new wave of infections that spread nationwide.

But critics expressed worries that the declaration was a gambit to cling to power by Muhyiddin that could erode civil liberties.

"The declaration of a state of emergency seems like another attempt by Muhyiddin to hold on to power, block elections and to remove parliamentary oversight, rather than to seriously address the pandemic," tweeted Josef Benedict from Civicus, a global alliance of civil society organisations and activists.

"A dark day for democracy."

Marina Mahathir, an activist and the daughter of former prime minister Mahathir Mohamad, tweeted that an emergency declaration was a "declaration of failure".

Muhyiddin first tried to persuade the king to declare an emergency in October but was rebuffed. The last time an emergency was declared nationally was in 1969, in response to deadly racial riots.

Malaysia has been in political turmoil since March last year when Muhyiddin came to power without an election following Mahathir's resignation and the collapse of his reformist administration.

General » Be a reporter: Write and send your article » Subscribe for news alert
Tags: health, Malaysia