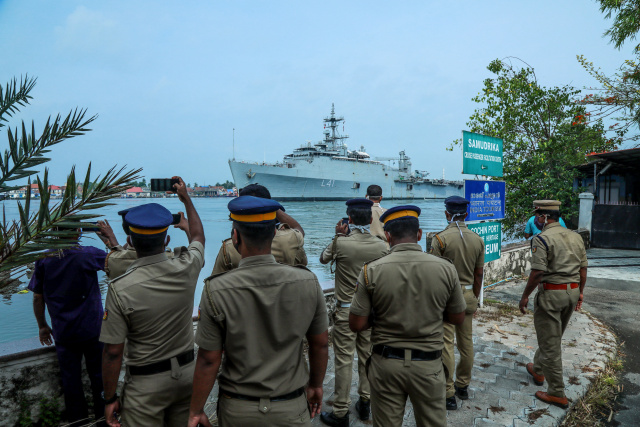 Kerala police personnel watch and take photos as the INS Jalashwa ship enters the Cochin port carrying Indian citizens who were stranded in Maldives due to the COVID-19 coronavirus disease, in Kochi in the south Indian state of Kerala on May 10, 2020. (Arunchandra BOSE / AFP)

(AFP) - Rich Indians can no longer escape their country's raging pandemic by holidaying in the Maldives, after the island paradise said Wednesday it would ban travel from South Asia as it battles a surge in Covid-19 infections.

The Indian Ocean holiday destination reopened its tourist resorts in July last year after halting international flights for more than three months at the start of the pandemic.

But the atoll nation of 340,000 people has been grappling with a jump in cases, including a record single-day rise of 1,500 on Tuesday -- compared with less than 100 cases just one month ago.

Countries in South Asia, including its largest neighbour India, have been hit by a massive and deadly new wave of infections.

The indefinite travel ban would also apply to travellers who spend more than 24 hours transiting in the listed countries, or who had visited them in the previous 14 days, the ministry added.

Indians have been the largest single group of visitors to the archipelago this year.

Bollywood stars who had travelled from India in recent weeks include Alia Bhatt, her partner Ranbir Kapoor and Shraddha Kapoor, who posted Instagram photos of herself doing yoga at sunset at a Maldives resort.

Travellers from other countries are still permitted to travel to the Maldives' resort islets with a negative PCR test taken within 96 hours before arrival, but are not permitted to have contact with the local population.