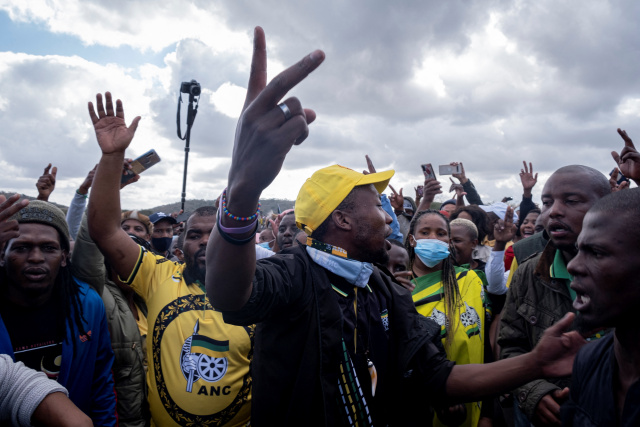 Supporters gesture as they gather in front of former South African president Jacob Zuma’s rural home in Nkandla on July 4, 2021. On July 3, 2021, hundreds of supporters gathered to show solidarity for former South African president Jacob Zuma outside his Nkandla homestead, as the deadline looms for him to surrender to the authorities. In an unprecedented ruling, the constitutional court told Zuma on June 29, 2021 to hand himself over by Sunday to start a 15-month jail term for contempt of court after he repeatedly refused to give evidence to corruption investigators. (Emmanuel Croset / AFP)

(AFP) - Buildings were set on fire and properties looted in South Africa on Monday as unrest sparked by the jailing of ex-president Jacob Zuma last week continued for a fourth day.

The country's top court, which ordered Zuma jailed for refusing to appear before a corruption probe, is holding a review of its decision with a ruling expected later on whether the sentence will be upheld.

The 79-year-old former anti-apartheid fighter remains popular, especially in his native KwaZulu-Natal province where he is seen to embody traditional values.

KwaZulu-Natal was hit hard by protests over the weekend, and on Monday flames could be seen coming from the roof of a shopping centre in provincial capital Pietermaritzburg as hordes of people rushed in to loot.

In Eshowe, a town near Zuma's Nkandla home, police opened fire to disperse crowds after a supermarket was ransacked early on Monday.

Police said some sections of a major road in Johannesburg had been closed because of the protests.

Dozens of cars were torched over the weekend in Johannesburg and KwaZulu-Natal, where protests erupted a day after Zuma was imprisoned on Thursday.

Police said dozens have been arrested.

Although some of the protests appear to have been triggered by Zuma's 15-month detention for contempt of court, they are tied in with economic hardship and tightened restrictions brought on by a third wave of the Covid-19 pandemic.

"While there are those who may be hurt and angry at this moment, there can never be any justification for such violent, destructive and disruptive actions," he said.