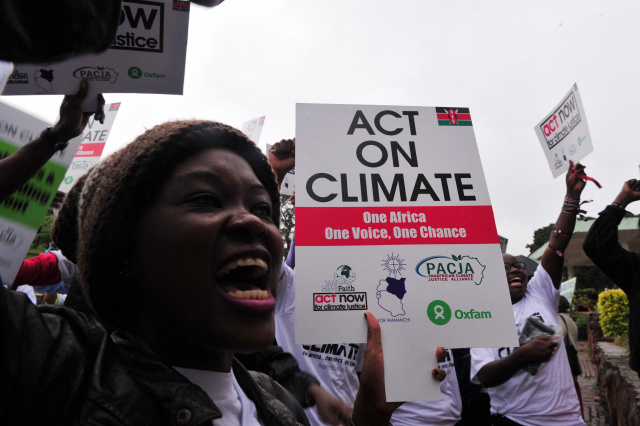 Hundreds of people with placards take part in demonstration calling for climate change justice for Africa, on November 14, 2015 in Nairobi. Africa calls on global leaders to action climate and fight for Africa's survival at Paris COP21 climate negotiations. People across Kenya and the continent already hard hit by the impacts of a changing climate with increased drought and food price rises seeing more people go hungry. Millions more people are going hungry every year, with some predictions showing that by 2050 50 million more people will be at risk of going hungry because of climate change. (AFP PHOTO/SIMON MAINA)

(AFP) - Nations most vulnerable to the impacts of global warming on Thursday called for rich countries to live up to their promise to finance the fight against climate change, ahead of a crunch UN summit.

Highlighting a "worrying lack of urgency" from recent G7 and G20 summits, dozens of countries said the COP26 talks in Glasgow later this year needed to deliver help to communities already impacted by climate-driven extreme weather.

With growing warnings from scientists and climate change gaining international attention, the pressure on delegates to achieve meaningful results is huge.

As well as finalising the rulebook implementing the 2015 Paris agreement, nations are also expected to make good on a 2009 promise to give climate-vulnerable nations $100 billion annually to draw down their emissions and adapt to climate impacts.

"At least $100bn per year was promised by 2020 with increased annual sums from 2025," the countries wrote in their five-point plan for COP26.

These include Kenya, Ethiopia, Gabon, Somalia, the Philippines, Bhutan, Tanzania and Bolivia.

"However, this target has been missed and needs fixing urgently if developing countries can trust richer nations at COP26 to keep to what they negotiate."

They also called for at least 50 percent of funding to be allocated to future climate adaptation, as well as separate allocation for the "loss and damage" already inflicted upon poorer nations by the historical emissions of rich economies.

The accord also strives for a more ambitious 1.5-C temperature cap.

But six years after the deal was signed, several issues remain unresolved.

These include how carbon markets are governed and how climate finance is accounted and reported.

The plan, formulated with government ministers, negotiators and climate campaigners from nations across Africa and southeast Asia, called for richer nations to do their "fair share" of emissions cuts.

This would include historic polluters rapidly decarbonising their economies and paying poorer nations -- least responsible for the climate crisis -- to do likewise.

The developing nations said rich emitters also needed to agree as a matter of priority the final details of the Paris rulebook.

"A lack of keeping promises on these key areas of finance, adaptation, and loss-and-damage is unacceptable," said Fekadu Beyene of the Ethiopian Environment, Forest and Climate Change Commission.

"What's the point of agreeing on a new set of promises if we don't keep them?"

"These elements are what are required if we're going to meet the challenges of the heating planet and its devastating climate consequences," he said.

The UN says that emissions must fall more than 7 percent every year by 2030 in order to keep the 1.5-C Paris temperature goal in play.

Although Covid-19 lockdowns and travel restrictions saw emissions plunge in 2020, concentrations of planet-warming CO2 continue to climb ever higher.

"COP26 will be both a moral and practical test that will define the legacy of political leaders: earning them a badge of honour for steering the world through this critical time, or bearing the shame of being complicit in our demise."