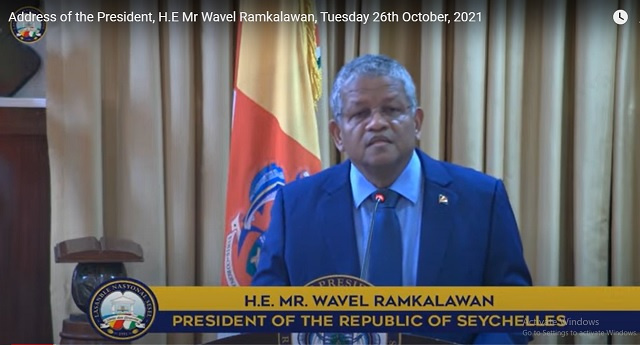 (Seychelles News Agency) - The vaccination campaign and the recovery of the tourism sector are two of the successes achieved by the new government, President Wavel Ramkalawan said in an address on Tuesday to mark the one-year point in his presidency.

Ramkalawan, who made his address in the National Assembly, said that the present government took over leadership of the island nation in the most difficult time when the Seychelles' economic situation was not good.

"The engagement I gave this day in October was for me to serve the people and for me to give everything I had. Today I can tell the Seychellois people that it is with pride that together with the Vice President and the dynamic team of ministers, we have been able to do exactly that," said Ramkalawan.

"The economy is one of the subjects that has worried the cabinet of ministers but with good planning we managed to reopen our borders. When the Minister of Finance will present the budget 2022 to the National Assembly on November 12, he will present a budget that will show that we are on the right track," he added.

Ramkalawan said that the number one priority as a government was to stabilise the economy in the face of COVID-19.

With a successful vaccination campaign, Seychelles, an archipelago in the western Indian Ocean, was able to reopen its borders to visitors on March 25 to relaunch its tourism industry, the top pillar of its economy.

"The vaccination programme that we started took place because we have good friends. Seychelles up to now has not spent a single cent for vaccination except a small fee we had to pay for the transportation for the Pfizer vaccines," said Ramkalawan.

"For the vaccines, I want to thank Abu Dhabi, India, China, Russia, United States and all private individuals and investors. I also want to thank all private laboratories that have helped to do necessary testing so that our country could cope with all the tourists who were coming in. This has helped us rebuild our economy," he added.

Ramkalawan spoke about the various developments taking place in other sectors to ensure food security.

"In our fisheries sector there are many facilities being upgraded and we are going towards sustainable fisheries. In our aquaculture sector we are receiving interest from both foreign and local investors," he said.

The president also talked about the various initiatives in the agricultural sector and the move to develop the industry on the outer islands.

The fight against illicit drug trafficking is another area that Ramkalawan said "is bearing fruits and the security forces are putting it under control."

He concluded by saying that "our government remains committed in the fight against corruption... We will continue to promote democracy and ensure that progress and unity reign on our land. We will continue to bring down the cost of living and give out people a better life."

General » Be a reporter: Write and send your article » Subscribe for news alert
Tags: National Assembly, Cabinet of Ministers, COVID-19