Burkina mine death toll rises to 63 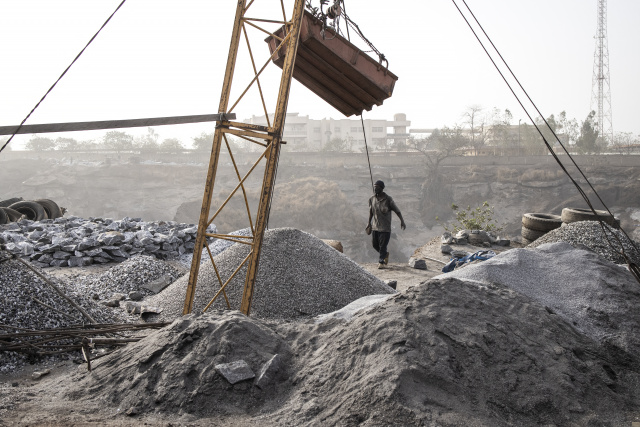 (FILE) A man sorts the different sizes granite at Pissy Granite Mine in the centre of Ouagadougou on January 29, 2022. Surrounded by roads, houses and administrative building in Ouagadougou lies the massive, forty year old Pissy Granite Mine. Hundreds of artisanal miners work cracking the granite slabs and carry out small and large chunks up the steep walls of the crater for a few euros a day. (JOHN WESSELS / AFP)

(AFP) - The death toll from an accidental explosion at an illegal gold mine in southwestern Burkina Faso rose on Tuesday to 63, the authorities said, adding that they had made an arrest.

"We have 63 dead and around 40 injured," the public prosecutor in the town of Gaoua, Alpha Compaore, told AFP.

A hospital source put the number of injured at 70.

A previous toll announced on state television late Monday said there were 59 dead.

The dynamite blast occurred at a clandestine gold mine at Gomgombiro.

The explosion left a large crater and uprooted trees, the resident said.

Compaore said one person had been arrested and may be charged with accidental manslaughter.

"We hope that this person will be able to provide an explanation about the circumstances and causes of the explosion," he said.

"The explosion took place in a miners' market, where there are products that are dangerous, prohibited or banned by the law, such as cyanide or dynamite," he said, adding that some homes had been levelled by the blast.

The region's governor, Wendinmanegde Emmanuel Zongo, announced on Tuesday he was closing the mine until further notice and urged miners and local people to "work honestly" with investigators.

Legal mining in the impoverished Sahel country generates about 70 tonnes of gold per year, making it the country's biggest export, and generates around 15,000 jobs directly and 50,000 indirectly, according to official figures.

But illegal gold mining is rampant, and typically flouts safety and environmental standards.

According to an estimate by the mining ministry, unauthorised mines produce 10 tonnes of gold per year and provide work for around 1.5 million people.