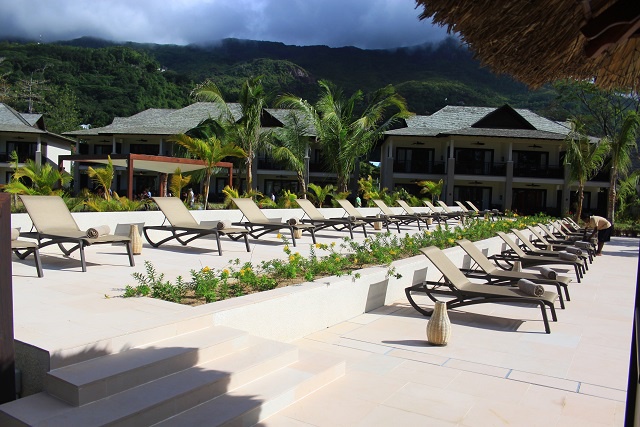 Partial view of one of the latest resort to grace the beautiful shores of the Seychelles archipelago, the H Resort. Tourism remains one of the sectors attracting a lot of businesses in the island nation. (Joe Laurence, Seychelles News Agency)

As was the case in 2015, the latest report features a change in the way the scores are calculated leading the World Bank to recalculate all of last year’s rankings.

The adjustments have placed the Indian Ocean island nation further down in 104th position in 2015 instead of the 85th position awarded in the 2014 Doing Business report.

Based on the recalculations and methodology changes, the archipelago’s 95th position in the 2016 report, therefore means Seychelles has climbed 9 places overall compared to last year.

Regionally, Seychelles has climbed one place to the 5th position in the Sub Saharan Africa region compared to last year’s 6th position.

The Indian Ocean neighbouring island of Mauritius, which is ranked 32nd globally has maintained its first position in the region while Rwanda (62), Botswana (72) and South Africa (73) are ranked second, third and fourth respectively.

The annual report, published for the 13th time this year measures the ease of doing business, based on the regulations and corresponding red tape surrounding starting a business and trading in each of the 189 economies it assesses. It ranks the world economies based on 10 sets of indicators.

Commenting on the methodology changes in its recent publications, the World Bank states that the 2016 report completes “a two-year effort to expand benchmarks that measure the quality of regulation, as well as efficiency of the business regulatory framework.”

This it adds, is aimed at providing a better reflection of reality of business operations in each country that is assessed.

‘Dealing with Construction Permits’, ‘Getting Electricity’, ‘Enforcing Contracts’, ‘Registering Property’ and ‘Trading Across Borders’ are the five indicators that witnessed changes in the latest report.

Since last year the World Bank has been implementing a “Distance to Frontier (DTF)” calculation method. This measures a country’s progress against the best performance achieved by any economy.

According to the Doing Business Report 2016, Seychelles has scored 61.05 percent this year compared to 58.31 percent last year.

‘Getting credit’ is the area in which the Indian Ocean archipelago of 115 islands with a population of around 93,000 people has witnessed the most progress achieving a ranking of 109 compared to 171 last year, recording 30 percent increase in its DTF rating (from 10 percent in 2015 to 40 percent this year).

The report states that “Seychelles improved access to credit information by establishing a credit registry.”

The reserve bank explains that the system is one that collects and combines credit information on clients of credit institutions, providing such information upon request to these institutions.

‘Dealing with Construction permits’, Paying Taxes’ and ‘Trading Across Borders’ are three indicators in which the country maintained the same ranking as last year.

Doing business report - an opportunity to look at best practices

Commenting on the Seychelles performance the Seychelles Minister of Finance, Trade and the Blue Economy Jean Paul Adam has said that while the methodology changes applied in compiling the report makes it a bit difficult to compare the country's performance based on the various indicators, the priority remains on improving the business experience in the country.

Adam noted that a lot of efforts have been made since last year to improve the availability of data provided to the World Bank while adding that the Bretton Woods institution does make use of available data from other sources.

“This is reflected in the improvement in our ranking if you apply this year’s methodology, but there are still some challenges in terms of how you measure certain areas in the context of a small economy…,” said Adam in a press interview this afternoon.

“..The first indicator we look at is the businesses themselves, how they see the business environment… there are still constraints in terms of procedures and bureaucracy….We have already implemented some reforms in terms of how the licensing authority operates, a second phase of reform is coming which will include changes in some laws. We also have the new companies act which will come in next year…We are confident that when we have these element in place we will improve the business experience in Seychelles.”

The finance minister noted that although businesses have been able to access funding especially small businesses through various schemes implemented by the government, access to credit is still one of the main concern in the island nation especially in terms of loans being made available to businesses by the Commercial banks.

According to Adam the ministry is engaging with banks to shift the situation with the help of the Central Bank as well as with the International Monetary Fund and World Bank’s support.

“At times to improve you also have to look at the best practices worldwide and this is where the report comes in to help us see what works best in other countries."

The Chairman of the Seychelles Chamber of Commerce and Industries, SCCI, Marco Francis is also of the view that while a lot has been done to improve the ease of doing business in the country in recent years, there's still a lot of challenges to be addressed in some areas.

Commenting on the aspect of Getting Credit, apart from the improved access to credit information cited by the report Francis noted "some improvements with regards to access to finance for small businesses, which can access loans from locally from various schemes as well as from international financial institutions."

On the downside he agreed that starting up a new business still remains a problem especially due to the bureaucracy that people setting up a new venture have to go through at times.

“One other weakness we need to work hard to address concerns lease document and registering a lease. A lot of our members obtain a piece of land from the government for example to carry out their business but they complain about the process of registering their lease which can take up to one year…this is one area we need to focus on in 2016,” said Francis.

Globally, Singapore has once again been ranked in first position in the World Bank’s 2016 Doing Business report, as the country with the most favourable business environment in the world, for the third year in a row.

The other world economies placed in the top ten of countries with the most business friendly regulatory environment are New Zealand (2), Denmark (3), Republic of Korea (4), Hong Kong, China (5), United Kingdom (6), United States (7), Sweden (8), Norway (9) and Finland (10).