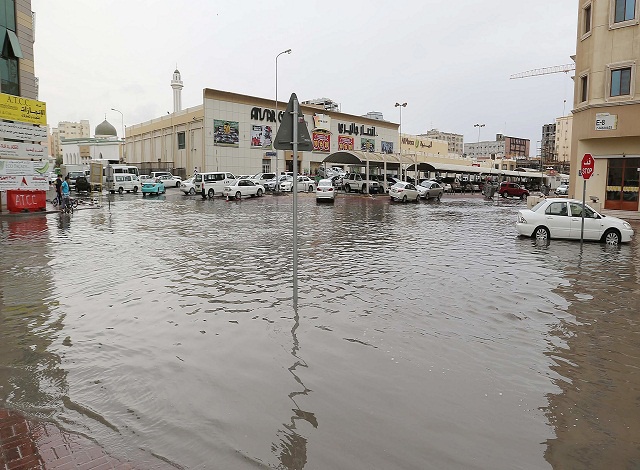 A view of a flooded street in the Qatari capital Doha following heavy rainfall on November 25, 2015. Yesterday, Qatar was hit yet again by heavy flooding causing gridlock on the desert country's roads as well as closures of schools. (KARIM JAAFAR / AL-WATAM DOHA / AFP)

(AFP) - Rainfall caused widespread flooding in Qatar on Saturday, potentially raising fresh concerns about infrastructure in the Gulf country due to host the 2022 football World Cup.

"As the rain continues to pour in most parts of the country, motorists are advised to be cautious," the interior ministry tweeted after earlier calling the rainfall "medium to heavy".

Some apartment buildings on the Pearl Qatar, an artificial island in Doha, estimated to have cost $15 billion (13.5 billion euros) to build, suffered flooding, as did the nearby suburb of Qanat Quartier, built to resemble Venice.

The Doha News website reported that the Qatar Animal Welfare Society pleaded urgently for foster homes to take care of its dogs because of the conditions.

Many people used social media to post videos and pictures, with some questioning how a relatively small amount of rain -- the first of the winter -- could cause such problems.

The wet weather had been predicted and the government "Rain Emergency Team" had already convened to discuss potential problems.

Last November, the government began an inquiry after rain damaged Doha's Hamad international airport, which opened in 2014, flooded roads and streets and caused some schools to close.

Gas-rich Qatar is spending more than $200 billion on major infrastructure such as roads, the airport, a metro system and a new city ahead of the 2022 World Cup, which will be played at this time of year -- from November 21 to December 18.