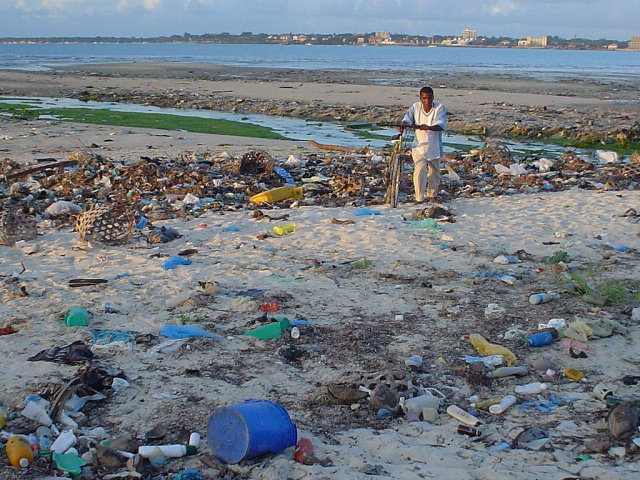 (Seychelles News Agency) - The damage posed by plastic waste materials on marine life is estimated to be $13 billion annually. Two reports detailing the extent of plastic damage to marine ecosystems were presented on the first day of the just concluded United Nations Environment Assembly (UNEA). This global environmental policy meeting held in Nairobi ended last week and was attended by all the 193 UN members.

This was the first time that the environment was being discussed and decisions being made at the global level. The 2014 UNEP Yearbook and Valuing Plastic are the two crucial documents that helped shape the discussions at UNEA 2014.

“Plastics have come to play a crucial role in modern life but the environmental impacts of the way we use them cannot be ignored. Reusing recycling and redesigning products that use plastics can bring multiple green economy benefits from reducing economic damage to marine ecosystems and the tourism and fisheries industries to bringing savings and opportunities for innovations to companies while reducing reputational risks,” Achim Steiner, the UNEP boss said.

Massive mid ocean gyres, pollution of shores are some of the side effects of littering and lack of controls on landfills. Plastics are now a major source of concern to marine conservationists due to the threats they pose to sea creatures such as dolphins and sea turtles such as ingestion and entanglement.

According to the two reports, invasive species are spread through plastic fragments which are also responsible for damage to fishing and tourism industries. For the last four years studies have zeroed in on the ingestion of micro plastics by sea birds, fish and worms. The origins of these plastics have been traced to facial cleansers, toothpaste and gels which find their way to the oceans through sewage and rivers.

Other critical coastal concerns that the UNEP Yearbook covers includes the presence of excess nitrogen in the environment which brings about coastal dead-zones as a result of reduced oxygen presence  and increased plants growth which result in constrained fish spawning.

At present the identified ‘dead zones’ are said to number 500 and it is estimated that once the studies are spread to other areas the numbers will reach 1000.

The report does not just end with revealing the state of the world’s environment but goes ahead and makes recommendations on what authorities need to do such as investment in clean air policies, strict policing of pollution and waste disposal interventions all of which directly impact on maritime health.

Seychelles calls for SIDS concerns to be adequately represented

The Seychelles Minister for Environment and Energy Professor Rolph Payet was present at the UNEA meeting.

In a press statement following the discussions Payet highlighted the management of chemical and wastes as one of several key areas of concern for Small Island Developing States SIDS and suggested that the SIDS grouping should form a permanent grouping at future UNEAs to ensure that their concerns are adequately represented in the outcomes and resolutions.

"The issue of integrated chemicals and waste management is also important for SIDS as they lack the capacity to manage hazardous wastes and other types such as plastic wastes and micro plastics, which end up as marine debris. Fragile ecosystems and human populations are exposed to hazardous substances most of which are not even produced in SIDS,” said Payet.

He noted that Seychelles has developed and is implementing its 2012-2020 Sustainable Development Strategy and has embarked on numerous partnerships with the support of the Clinton Foundation to address the issue of waste management in Seychelles.

The Seychelles Environment and Energy Minister also led a high level meeting bringing together environment ministers participating in the United Nations Environment Assembly which focused on access to education, education for jobs, education for wiser consumption, and education for resilience as the key ways to achieve sustainable development.

“Facilitating the ministerial discussion was engaging and rewarding as the sharing of knowledge and experiences by the different countries was very encouraging,” noted Payet in a press statement he issued after the ministerial session.

Behind the scenes at UNEA

The historic UNEA meeting is over and the challenge now is for the Nairobi-based United Nations Environment Programme (UNEP) to position itself in the UN system under its new mandate. In diplomatic circles UNEA has beefed up UNEP’s status and given it more resources to shape global discussions on the environment. UNEP’s global reach was illustrated by the high powered 1200 delegates drawn from 193 member states attending its global conference.

Marine waste and plastics, water monitoring and standards, promotion of air quality and ecosystem based adaptation were among the main themes of discussions. Illegal trade in wildlife was however given a special slot as it featured exclusively in a ministerial dialogue session. There was a reason why environmental crime was given special status.

Estimates revealed at the meeting showed that illegal trade in wildlife species stood at between $7 and $23billion with species ranging from insects, reptiles, amphibians and mammals is said to be thriving. Illegal, unreported and unregulated fishing (IUU) with annual losses estimated to be between $11 and $30 billion.

The Environmental Crime Crisis, a report released during the conference proceeds from most of these environmental crimes are  said to find its way into organised crime groups and also to finance radical religious groups in places like the Democratic Republic of Congo, Somalia, Mali, Sudan and the Central African Republic.

UNEP’s role in bridging science, policy and practice especially in finding solutions for sustainable development challenges was noted during the UNEA meeting. In the five days of the meeting UNEP illustrated its lobbying prowess as its thematic caucuses notably “environmental rule of law” and ‘financing the green economy” attracted massive participation and attendance.

UNEP achieved a major scoop when the announcement made by the United Nations Development Programme (UNDP) that it was joining the UNEP-led ‘partnership for action for a green economy’.

This was unexpected but understandable considering UNEP’s past. Over the years UNEP has distinguished itself as a consensus builder and major collaborator on environmental affairs bringing together businesses, governments, civil societies and academia to fulfill its mandate. This multi-stakeholder approach helped build UNEP into what it is today as it learnt long ago the importance of inculcating diversity in its core decision making processes.

Based on the nature of its work and its newly achieved status, it was clear that the five days allotted for UNEA were inadequate to discuss the heavy agenda and some delegates complained of insufficient time for consultation and consensus building. This was among the notable suggestions which will be discussed further as the biennial UNEA meeting prepares for its second gathering in 2016.

The “coming of age” of UNEP and the culmination of the UNEA are considered as major career highlights for Steiner under whose tenure all these have been achieved. Interestingly when UNEA meets in 2016 Steiner’s final term as UNEP’s Executive Director will come to an end. In other words, intense lobbying for UNEPs next boss has kicked off in earnest but in whispers.

No name has been floated so far as to who would succeed Steiner well known as an advocate of “sufficient consensus” in delicate diplomatic negotiations.