Seychelles Presidential Elections 2015: voters head to the polls on first day of voting at special stations on Mahé, Praslin, Silhouette and the outer islands 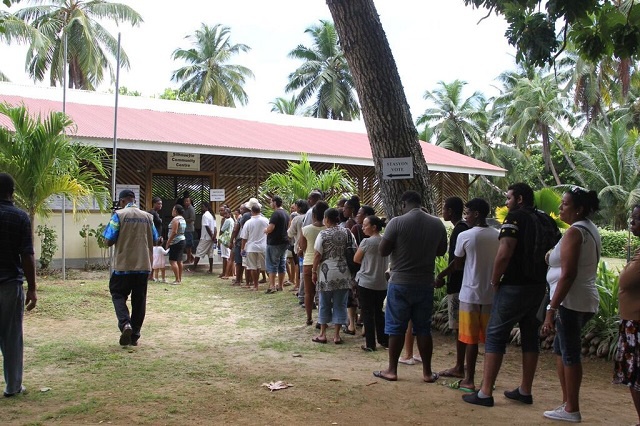 Voting on this Thursday December 3 is for voters who are living and working and the islands of Silhouette, Coetivy, Platte, Farquhar, Desroches, Poivres and D’arros.(Seychelles News Agency)

(Seychelles News Agency) - Seychellois voters have been heading to the polls since early this morning, on the first day of voting in the 2015 presidential elections in the western Indian Ocean island nation after three weeks of campaigning by the candidates contesting the elections.

Voting on this Thursday December 3 is for voters who are living and working and the islands of Silhouette, Coetivy, Platte, Farquhar, Desroches, Poivres and D’arros.

Special voting stations have also been set up at Baie St Anne on the Seychelles second main inhabited island of Praslin for voters from all electoral areas on Mahé and the inner islands who are temporarily residing on Praslin work purposes.

On the main island of Mahé, there are four special stations; one at the Montagne Posée prison in respect of people who are on remand, one at English River a central district, for people working in essential services and who will be working on the main polling day on Saturday, the third is at North East Point for people residing at the home for the elderly and North East point hospital.

A fourth special voting station is for people residing at Ile Perseverance, the largest social housing project undertaken by the Seychelles government on a reclaimed land next to the main island of Mahé.

Most of the special voting stations on Mahé opened at 7 am local time. For the other islands officers, Electoral officers along with the representatives of the candidates, the police and observer missions where possible, have been travelling by plane and by boat to the different islands to allow people to vote since early this morning.

SNA spoke to a few voters after they had voted at the special voting station at Ile Perseverance at around 10 am, most of whom had been standing in line as early as 7.30 am.

“It’s been almost a year since I have been living at Ile Perseverance I am registered in the Plaisance Electoral Area,” said Iriny.

“So far the process of voting is going well, I did not have to wait for too long to vote.”

“I have been living here for about 5 years. It’s going a bit slow but it’s flowing well,” said Josette, another voter availing of the Special voting facility.

According to the Electoral Commission there are some 2 thousand people listed as eligible to vote at the Special Station at Ile Perseverance.

“It’s been over three years since I’ve been living at Perseverance but I normally vote in the Mont Fleuri district…the only hassle is the heat, I think the organizers should have plan for some kind of shelter while we wait in line, but apart from that everything is okay, all is calm,” Sharon told SNA.

According to the electoral Officer overseeing the voting process at Ile Perseverance, Alex Souffe, the station which is located at the Ile Perseverance primary school opened at 7 am as prescribed by the law and voting will be ongoing until 4 pm local time.

“So far we have had a good turnout of voters, things are moving quite fast despite the line being very long. It is inevitable, but we have encountered some cases where some names are not on the list. We need to keep in mind that those people are registered in other districts and have recently become residents of Perseverance so it is not automatic that their names appear on the Perseverance list. Those people are now being given a slip so that they know in which district they will go and vote on Saturday,” Souffe told SNA this morning.

On Silhouette voting which started at 9 am has already ended at 1 pm at the island's Community Centre for residents of the island as well people working on the island.

According to the Electoral Officer in charge of the station Justin Mathiot, everything went well and speaking to SNA some 15 minutes before voting ended he said that some 180 people had voted adding that they had a list of around 200 people to vote on the island.

"When the station opened at 9 am there were some 15 people standing in line and as time went by more people came everything have been going well...we've only had two cases where their names were not on the list and of course they could not be allowed to vote," Mathiot told SNA.

Incumbent president James Michel the leader of Parti Lepep is vying for his third and last term at the helm of the island nation’s government.

He is facing three candidates who are contesting a presidential election for the first time; David Pierre the leader Popular Democratic Movement, Alexia Amesbury, a Seychellois lawyer who formed the Seychelles Party for Social Justice and Democracy in May and who is also the first female presidential candidate in Seychelles.

Another first time presidential contender is Patrick Pillay a former high-ranking figure within the ‘Parti Lepep’ who formed his party ‘Lalyans Seselwa’ [Seychellois Alliance] in May.

Wavel Ramkalawan the leader of the Seychelles National Party who is standing for the fifth time and Independent Candidate Philippe Boullé who is participating in his fourth consecutive Seychelles presidential election as an independent candidate, are the two other candidates.

Nearly 71 thousand eligible Seychellois voters are being called to the three-day poll to choose among the six contenders this year.

Voting will continue on Friday where more islanders living and working on the outer islands of Astove, Assumption, Aldabra, Marie-Louise, Remire, Ile aux Vache, Denis and Fregate will be voting.

The main population of eligible voters on the three main populated islands of Mahé, Praslin and La Digue will cast their votes on the main polling day on Saturday December 5, which will be a public holiday.

The incumbent Head of State called early presidential elections, according to the 5th amendment of the Seychelles constitution on October 1, 2015.

The election was initially scheduled for November 19, 20 and 21 but the Electoral Commission had reschedule, announcing December 3, 4 and 5 as the new dates to allow the political parties more time to prepare for the vote.