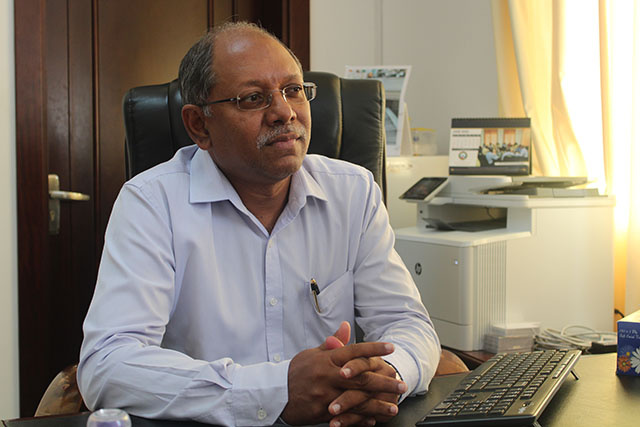 Afif said this time around the impact is way more than in 2008 for the simple reason that the three main pillars – tourism, fisheries and offshore – were still functioning in 2008. (Rassin Vannier, Seychelles News Agency)

(Seychelles News Agency) - The near-term economic fallout of the COVID-19 pandemic on Seychelles has already been severe. Travel restrictions have hit the island nation's main source of income, the tourism sector, hard.

SNA spoke to Ahmed Afif, an economist and politician who is an elected member for Linyon Demokratik Seselwa (LDS) and a vice presidential candidate, for his thoughts on the situation.

SNA: When Seychelles went through its worse economic crisis in 2008, you were working for the Ministry of Finance. Would you say that the situation now is similar?

AA: This time around the impact is way more than in 2008 for the simple reason that in 2008 our three main pillars – tourism, fisheries and offshore – were still functioning.

In 2008 we had domestic reforms with the assistance of the International Monetary Fund, to change the way the government was managing its budget and that allowed it to make a surplus instead of a deficit.

For example, it managed to collect more revenues from businesses. Also because of its obligations towards debt repayment or restructuring, it had to reduce its expenses, so that it could make a surplus. It implemented programmes such as early retirement for some workers to streamline/downsize the public sector and make it more efficient but with less resources.

In return, the country received financial assistance from the IMF, the World Bank, and the African Development Bank to pay its creditors or for its loans to be written-off.

This time around is worse because we do not have all three economic pillars functioning at full capacity. Tourism is at a standstill. In 2008 we still had flights to Seychelles albeit with fewer visitors. Now we do not have any flights. So, the impact will be worse and everyone will need to make sacrifices.

SNA:  Do you believe our international reserve will be able to withstand the pressure?

AA: We have to note that most of what we use as a country, from food to fuel, are imported, which puts a lot of pressure on our foreign exchange earnings.

Therefore, we need foreign exchange on a regular basis because it will reduce considerably if you are just using it to pay for products and services and not replenishing it. The situation now is that revenues are not coming in, but our expenses have remained the same. We are getting a little from the fisheries and offshore sectors but it not enough. What we need to do right now is reduce the amount we are spending.

We should also find ways to relaunch the tourism industry which is our main foreign exchange earner. However, we must be cautious and achieve a balance between reviving the industry and protecting the health of our population. This is a big challenge.

SNA: We speak of diversifying the Seychelles' economy, so as not to rely entirely on tourism, is that possible?

AA: It is difficult to find new resources because we are small. We have our beautiful islands, some fish, and our offshore sector. We do not have oil or minerals like some other countries. What we need to do is try to find ways to earn more from the existing resources. For example, in fisheries, are we getting a good deal from the European purse seiners or can we earn more through license and transhipment fees.

Today Seychelles earns around $10 million in license fees and $4 million in transhipment fees. But when you calculate that the vessels are fishing around 200,000 tonnes of tuna and a tonne is nearly $2,000, they easily make between 200 and 300 million dollars.

And to think that we are only earning some $14 million from this sector annually. Maybe we should relook at the negotiation process with the EU. Another suggestion is for us to have our own purse seiners. We run a successful oil tanker operation with five tankers fully owned and managed by Seychellois, so why can't we do the same with tuna fishing and have our own fishing vessel?

I am not saying that the government should make that investment but what about the private sector? One vessel, fishing 2,000 tonnes of tuna on each trip will be a huge plus for the country.

If we cannot invest in tuna fishing, why not encourage longline fishermen to source out new markets especially in countries like Japan, where they could export fresh tuna. That is if they can surmount the logistics to get the product from Seychelles to its destination in the shortest time possible.

This would have been a new source of revenue for Seychelles.

SNA: Do you think the various schemes announced by the government to help the population is reasonable and sustainable?

AA: They will not be sustainable for long. We had already approved budgets for social assistance such as welfare and for those who have lost their jobs due to COVID-19. The government needs to collect revenues to be able to pay all these schemes. But they are not collecting revenues, through VAT (value added tax) because hotels and most restaurants are closed.

In fact, the government is registering a deficit this year while still assisting the population through various financial schemes. So how do they do that? The government must borrow from other sources. Already they have borrowed 500 million rupees from the Central Bank, the first time in 12 years.

It is also borrowing from international organisations like the World Bank and the IMF. That is the only way for the government to honour its obligations towards the population. This is not sustainable because then we will have to start repaying our debts and we will not have the money to pay those debts.

So now you have a situation like that of 2008, where money coming in is not enough to pay the country's debts. So, you will have to borrow again to repay new debts. This is not sustainable.

SNA:  What are your views on the IMF prediction that it will be a fast recovery with an 8 percent GDP next year?

AA: It is possible to have an 8 percent growth but I haven't run the numbers yet so I cannot say. But when you are at zero, any growth that happens next year will be considered a positive. Growth is possible but based on how our economy has contracted in 2020, 8percent will not be a lot, but as I said still encouraging.

SNA: If Linyon Demokratik Seselwa is elected in the next presidential election, what are short term measures that will be put in place to relaunch the economy?

AA: Our focus should be to create an environment where businesses can grow. This will in return create jobs for our people and wealth for the country. This does not mean that we do not want foreign investors or workers in our country because there are sectors for example in construction where we still need foreigners. However, we should look at other areas where we can localise some posts and give opportunities to our own citizens and employ foreigners only in areas where we cannot localize the post.

To create more wealth, we just need to look at our existing sectors – fisheries, tourism, financial offshore – and find ways to get more benefits for the country.

Also we should find ways to encourage local businesses to invest in fisheries and compete with the current European countries fishing tuna in our waters. I am not saying that we should get rid of the foreign purse seiners because we still earn from them, but the sector should also see the participation of Seychelles' owned vessels.

SNA: You have been nominated as the vice-presidential candidate for LDS for the upcoming elections. Is it because you want to remain in politics or you want to help the country?

AA: I enjoy being in politics because it is something that needs to be done especially at this stage where we are at, in our development. The way I see it is that we have a more transparent politics, one which is inclusive and does not favour a little group of people in the country. One where we look at the country first and not individual interests.

I believe that previous politicians have focussed too much on their party and looked at their own instead of the country. This meant that those who did not have the same political belief or ideology were penalised and left behind.

If we are to say that between 40 and 50 percent of the population supports the opposition, and they were marginalized, then it means that the whole machine which is the country, could not function to its full capacity with the participation of all its citizens.

If we change that mindset, where instead of focusing on a party and its supporters, we focus on the whole country, then this will be beneficial for us a nation, because everybody will be participating actively in the country's development, regardless of their political affiliation.

If we come to power and adopt that same mentality where we look at our supporters only, then I believe we will fail as a party. Our politics is one that encourages everyone to help develop Seychelles.

That is my vision that we work for the country, and to never let power go to our heads because if this happens, then we will lose everything.