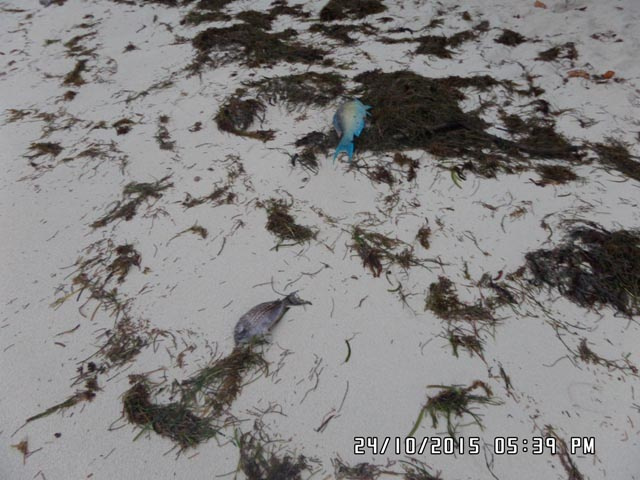 A similar event happened around the same time in 2015.  (Marc Francois/LWMA Praslin).

The principal fisheries scientist of the Seychelles Fishing Authority (SFA), Ameer Ibrahim, told reporters that preliminary findings on samples collected around the affected area and the weather forecast provided by the meteorological office show that the algae are moving toward other regions.

Ibrahim said that the samples from Denis island are clear while those from areas around Praslin showed concentration of algae.

"The Met Office has sent us sea surface current map and these currents seem to indicate that the algal bloom is moving in a north north-easterly direction off Praslin, which may avoid hitting Mahe," he added.

SFA is warning the public not to collect the dead fish on the shores and to avoid eating fish caught in the regions mentioned as certain species of the algae can be poisonous.

An algal bloom is a natural phenomenon involving the rapid growth and population explosion of algae in the sea whenever there are sufficient nutrients, calm conditions, hot temperatures and other specific conditions. These blooms may cause the death of fish and other marine animals.

“This time around we are seeing that even the larger fishes like the red snapper and sharks are washing up dead on beaches. It is likely that smaller organisms ate the toxic algae and the bigger fish then ate those smaller ones which caused them to be poisoned. We are concentrating on determining what species of algae it is and what kind of toxin it contains as well as any possible effects on humans,” said Ibrahim.

This year, the phenomenon was first reported to local authorities on Friday, October 27. Apart from the dead fish, mostly coral reef species, washing up onto the beach from the sea, another major occurrence observed is a change in the colour of the sea in some areas to a yellowish or brownish red.

SFA said it will continue to monitor the situation and ask the public to inform their office if they see places where the algae are forming.

Around the same time in 2015, the same event was recorded along the shores in various parts of Mahe, Praslin and other satellite islands. According to an article by the chief executive of Nature Seychelles, Nirmal Shah, on the event in 2015, “algal blooms are rare in Seychelles which is famed for crystal clear waters.”