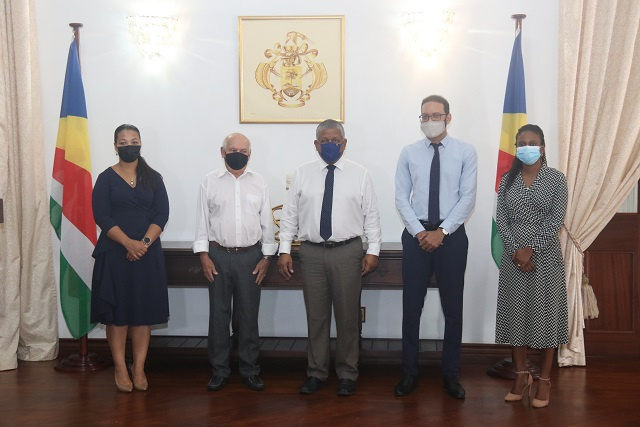 (Seychelles News Agency) - President Wavel Ramkalawan said Friday that it's important to take action to counter corruption in the island nation as he appointed members of the advisory council of the Anti-Corruption Commission.

The new advisory council, which replaces the former board of the Anti-Corruption Commission of Seychelles (ACCS), is comprised of accountant Bernard Pool as the chairperson and three other members: Angelique Antat, Damien Thesee and Diane Azemia.

The council will oversee the administrative policy of the Commission and also review provisions of the law for the prevention of corruption and make recommendations to the president for effective implementation.

In a small ceremony at State House, Ramkalawan addressed the council as well as the chief exeucitve of the ACCS, May De Silva, and urged them to step up and take the necessary actions to deter acts of corruption in Seychelles.

"The people of Seychelles have high expectations and some remain disappointed at the lack of concrete progress being made. The Commission along with the council must work to help recover money lost to corrupt practices, which will help to improve the standard of living in Seychelles," said Ramkalawan.

The President also called for those who have benefited from corruption to come forward and give back to Seychelles, an archipelago in the western Indian Ocean, to help improve health and education in the country.

On his side, Bernard Pool, the chairperson said that "as an advisory board, we shall not interfere with the work of the commission, but will rather help to give it the necessary administrative and legal tools to perform its duties."

The four members of the council were selected after a thorough interview process and the chairperson said that he applied for the position because, with his accounting background, he can offer a lot to the Commission.

"I have been working in the field for a long time and now as a retiree, I feel that I have something to give back," Pool added.

The advisory council replaces the board of the ACCS, which was formed in 2016 and headed by Justice Duncan Gaswaga. They were responsible for appointing the Commissioner of the council.

The restructuring of the ACCS was announced by Ramkalawan earlier this year, where he gave the Commission until the end of the year to produce results or he will close the Commission.

De Silva said that there is a lot of work that goes on at the Commission and the staff is fully focused on the task at hand.

"We understand the public has high expectations, but we also have to ensure that we deliver proper cases with ample evidence to the court. We know that we are delivering on our mandate and soon the public will see people start appearing before the court for corruption," she added.

The ACCS was established under the Anti-Corruption Act 2016 which gives it authority to investigate, detect and prevent corrupt practices. It is a self-governing, neutral and independent body that is not subject to the direction or control of any person or authority.