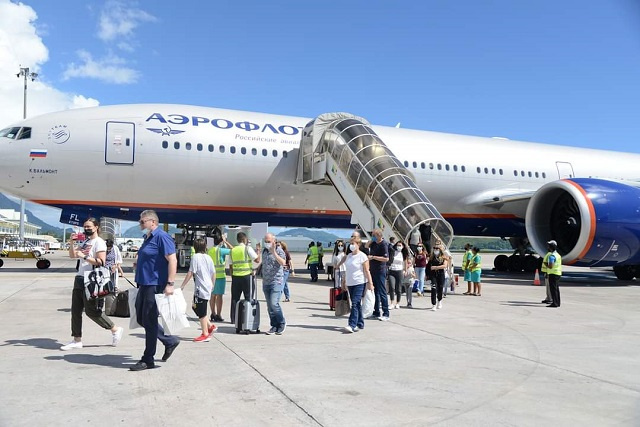 Russia remains the top tourism market for Seychelles for the first quarter of 2022. (Tourism Seychelles)

Russia is set to resume flight connectivity with 52 countries, including Seychelles, as the country lifts restrictions put in place to fight the COVID-19 pandemic.

Meanwhile, Russia remains the top tourism market for Seychelles for the first quarter of 2022.

According to TASS, the Russian Prime Minister, Mikhail Mishustin, announced on Monday that starting from April 9, Russia is lifting restrictions set for fighting against the coronavirus pandemic. This applies to regular and charter flights between Russia and a number of other countries.

"Now, we are resuming flights with 52 countries, including Argentina, India, China, South Africa, and other friendly states," said Mishustin.

The Russian Embassy in Seychelles told SNA on Friday that "Seychelles was in fact among the very first countries with which Russia resumed flight connectivity when the borders started to open up gradually after the pandemic lockdown."

"The inclusion of Seychelles into the recently expanded list of countries to which no travel restrictions apply confirms once again that the archipelago maintains its position as a safe destination. As for direct flights, Aeroflot is working on a plan to resume them in the near future," said the Embassy.

According to the figures released by the National Bureau of Statistics on April 7, Russians remained the most numerous visitors to Seychelles for the first quarter of the year, after a record year in 2021, when Russia was Seychelles' top tourism market, contributing 32,000 of the country's total of 182,849 visitors.

This year, out of 77,655 visitors who arrived in Seychelles, a group of 115 islands in the western Indian Ocean, from January to March, 12,174 – accounting for 16 percent of total arrivals –  were from Russia. France was the second market with 11,109 arrivals, accounting for 14 percent of the total visitor arrivals for this period.

Furthermore, Aeroflot has said it will be resuming flights to some countries located in Africa, the Middle East, and Asia. Some Latin American countries of North and South America also made the list.

Russia's national airline cancelled its flights to Seychelles on March 9 after the airline had issued a press statement saying that all international flights except those with Minsk in Belarus would be temporarily suspended as of March 8.

Despite sanctions imposed on Russia by western and European countries due to its ongoing war with Ukraine, airlines such as Emirates, Qatar Airways, Etihad Airways, and Sri Lankan Airlines among others, continued operating flights to the eastern European country.